From SmashWiki, the Super Smash Bros. wiki
(Redirected from Past stages)
Jump to navigationJump to search 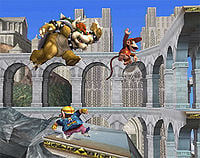 Temple, as it appears as a Melee Stage in Brawl.

Past Stages is the designation for returning stages in Super Smash Bros. Melee. In Brawl, they are known as Melee Stages.

In Melee, three Past Stages were available. They are replicas of their Super Smash Bros. counterparts, complete with music and backgrounds. All of these stages must be unlocked, unlike in the original game. The stages also seem to be slightly larger in size than before. None of these stages are used as a character's home stage in Classic Mode or All-Star Mode.

In Brawl, they are referred to as Melee Stages, as only stages originating from Melee reappear. As a result, this makes Brawl the only game where stages from the first Smash Bros. do not appear. These stages now utilize the functions of My Music, like most stages in Brawl. According to the DOJO!!, the stages are arranged so the player can get one from each game world.[1] This turned out to mean each universe that was represented in the original game, all of which had multiple stages in Melee. Unlike the Past Stages of Melee, some Melee Stages have had minor edits (which are listed below), while aesthetically remaining largely the same as Melee. As in Melee, none of these stages are used as a character's home stage in Classic Mode or All-Star Mode.

It should also be noted that most (if not all) of these stages are smaller compared to the characters than they were in Melee, possibly due to the character models being larger in order to provide more detail. Also, some of the music sounds slightly different than it did in Melee. Finally, the Pokémon Trainer gains platforms in the background.