This article is about the hitbox visualization in Super Smash Bros. Ultimate. For the move itself, see Vegetable. 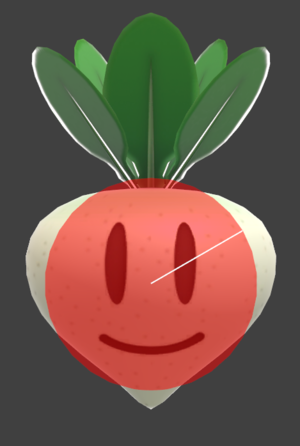 Peach performing a 0-to-death combo on Ridley with a turnip.

With Peach's down special, she plucks a Super Mario Bros. 2 Vegetable from the ground. She can then throw it as a projectile item. Its face determines how much damage it will do; the rarer the expression, the stronger the turnip. Along with turnips, Peach can rarely pull out Mr. Saturns and Bob-ombs.

It is a decent edgeguarding tool as it can disrupt an opponent's recovery. If the turnip bounces back on the opponent and the turnip is close to Peach's hand, she can air grab the turnip and throw it back at the opponent.

In competitive play, it is common for Peach players to use the down special at the start of the game. After KOing an opponent, they take advantage of the time interval for the opponent to get back on stage by using the down special until they get the desired item; if they do not have enough time, they will use the item they have.

Despite the different expressions the turnip has, they deal the same amount of damage and have the same knockback. The probabilities of pulling these turnips altogether is 89%.

Peach can perform turnip combos such as turnip throw to a dash attack at low percentages. She can also perform zero-to-death combos with a turnip.[1]

Turnip with the third strongest knockback with the maximum of 10% damage.

Turnip with the second strongest knockback with the maximum of 16% damage.

The turnip with the strongest knockback with the maximum of 24% damage. It can KO the opponent at reasonable percentages.

The second rarest item to pull from the down special, Peach can use Mr. Saturn as a shield breaking tool. The opponent can use it too if it is not in Peach's hands.

Peach can perform a combo with a Bob-omb by performing two down aerial while floating, then position herself to throw the Bob-omb onto the opponent. This can kill the opponent early at 0%.

Each turnip type has a unique base damage defined in their parameters. Per the item throw damage formula, the effective damage of each item is equal to the following:

The move can only be used on the ground and if Peach is not already holding an item.

The timings shown are for a Bob-omb exploding on impact with an opponent. During the first 4 frames, the Bob-omb stops the opponent in their last animation frame before it explodes.

These parameters only apply to turnips.