This article is about the hitbox visualization in Super Smash Bros. Brawl. For the move itself, see Vegetable. 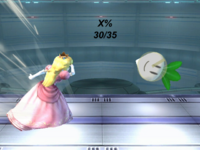 Peach's down special move is known as Vegetable, and involves her pulling out turnips from the ground. The faces of the turnips pulled vary, with each one being unique in terms of damage and knockback dealt. Different turnips are pulled out randomly, though the more powerful ones are rarer. The weakest and most common turnip is the normal, "smiley face" turnip, whereas the strongest and rarest turnip is the infamous Stitch Face. Peach can also pull out a Mr. Saturn, Bob-omb, or Beam Sword, which are rarer than the Stitch Face. Peach's turnips are known as very useful projectiles due to being able to keep opponents at bay and assist in combos and gimping offstage opponents (although they are considerably less effective for gimping than in Melee), and are a large part of Peach's stage control in general. Peach has multiple advanced techniques which make Vegetable even more effective. 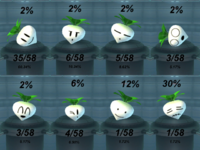 Damage of normal turnip throws varies depending on the type of throw and the distance that the turnip travels in the air. Z dropping a turnip right into an opponent deals the less damage and smash throwing a turnip at point blank range into their face deals the most damage.

While not exclusive to her, glide tossing is one of Peach's more simple and prevalent tricks she can perform with her turnips. A glide toss allows her to throw her turnips while moving towards or away from her opponents giving her a strong method to approach or retreat with turnips. This also makes turnips a strong combo tool as she can glide toss towards her opponents which can then lead into her other moves. Peach's forward glide is decently long although her backwards glide toss is fairly short.

If Peach performs Vegetable just as she's running off a platform, it will cancel the animation once she runs off the edge effectively allowing her to instantly pull turnips. This allows her to laglessly generate turnips which can mainly be helpful for edgeguarding.

If Peach pulls out a turnip and performs an initial dash at the same time, she will pull up the turnip while moving forwards. This is most easily performed if the C-Stick is set to special.