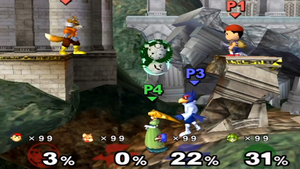 The black hole on Hyrule Temple

The black hole glitch is a glitch found in Super Smash Bros. Melee involving Reflector, Vegetable, and the Super Scope. The many thrown Vegetables become stuck in a crossfire caused by the scope. If players touch the Vegetables, they will quickly take heavy damage. The glitch was discovered by Aftermath and Juce in late 2004. There are a number of methods to perform the glitch, all of which involve Peach throwing several Vegetables into a stream of Super Scope shots; the glitch can theoretically be perfomed with any item that has a hurtbox and does not vanish when hit, but the physical properties of Vegetables and their ease of acquisition make them the only reasonable option.

The glitch occurs because the amount of Vegetables being focused into a single location overcomes a technical limitation in the game: for the purposes of preventing attacks from hitting the same thing twice, attacks can remember a total of 12 objects that they have already connected with. If an attack hits more than 12 things, it begins to forget about the first ones, and is therefore capable of damaging them again. As a result, funnelling more than 12 Vegetables into one place means they will continuously hit every other Vegetable in an infinite loop.[1]

It is likely that the list for "objects this attack has hit" has a limit in other games (as it is poor practice to allow such a list to be limitless), so in theory a black hole could be formed in other games if there were some way to bring enough viable items together. However, as an equivalent to the Infinite Super Scope glitch is not present in other games, there is no known way to set up the situation.

This method is the most well-known and first one reported. It requires 4 human players.

Any stage where two characters can face each other horizontally far apart while a third stands below them can be used. Examples include:

*These stages are not recommended, as the glitch only works when certain platforms are out.

This method is best when 4 human players are not available, and can be performed with as few as 2 players.

Any flat, unmoving stage whose length is longer than the range of a Super Scope shot. Final Destination is recommended.

After the black hole has been constructed, various modifications can be made. Beware that too many of these may cause a lot of lag or cause the game to freeze. 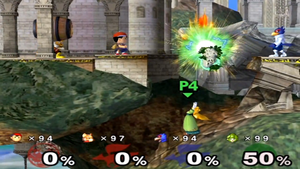 The Ultranova, caused by addition of PK Fire.

The most well-known modification is commonly named the "Ultranova". To perform this, the fourth character should be Ness. Perform PK Fire into the black hole, surrounding it with flames.

A weaker variant of the "Ultranova" that also involves Ness's PK Fire, the "Supernova" can be performed by first KO'ing one Fox/Falco so that he gains temporary invincibility from the revival platform. While invincible, Fox/Falco should enter the black hole and use Reflector, which will cause him to get stuck. Ness should then use PK Fire 13+ times into the black hole. Finally, have Peach remove her Vegetables from the black hole (by air-grabbing them with Z). This should leave the PK Fires alone stuck together.

To remove the black hole, the player should have Peach air-grab the Vegetables from inside. Once the number of Vegetables has dropped to 12 or fewer, the Vegetables' object memory will no longer be overrun, and the black hole will fall apart by itself. This can also be done by any other character unaffected by the Vegetables (such as a character on the same team as Peach with Friendly Fire off, or a temporarily invincible character).