This attack consists of Pikachu moving in a straight line in the direction in which the player's control stick is tilted, or upwards if it is not tilted. A tilt of the control stick in a different direction will cause another, similar burst. The quick speed of this makes Pikachu extremely difficult to hit, but it is exposed at the beginning (at least after Smash 64), middle, and end moments, when it briefly holds still. Quick Attack requires much practice before players can effectively take advantage of its two-direction functionality.

Unlike other special moves, Quick Attack completely lacks any hitboxes. However, it is considered one of the best recovery options overall in the game. The move travels a very long distance and since Pikachu can angle it and use it twice, Quick Attack is an extremely flexible and diverse recovery tool, giving Pikachu many options when using the move, to allow it to return back to the stage from great distances. Quick Attack is able to sweetspot the edge from almost any distance within the move's range and Pikachu can easily aim for the edge in order to grab it and avoid any lag the move would otherwise have. Pikachu can even extend Quick Attack's distance if they player lets go of the control stick after a warp. If this happens, Pikachu will retain the momentum from the warp. These traits also allows Pikachu to go far out from the edge to edgeguard, further than any other character can go and Pikachu will still be able to make it back to the stage. Pikachu is completely intangible during Quick Attack's startup which not only aids its recovery potential but it also allows Quick Attack to be used as an effective tool to escape disadvantage. The move's intangibility frames allows Pikachu to easily escape combos or shield pressure using Quick Attack. Even when Pikachu is not intangible, it is difficult to hit during Quick Attack's warps, making it hard to punish if Pikachu uses it effectively. The move's intangibility combined with its generous ability to snap edges, allows Pikachu to ledge-stall indefinitely, which is very difficult to punish. It can also go through a portion of the wall in Pikachu's Break the Targets stage strangely. 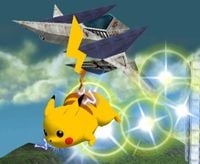 Super Smash Bros Melee's Quick Attack has seen some noticeable changes. One positive change the move received is that it now has a very weak hitbox while Pikachu is warping, which deals 3% on the first warp and 2% on the second warp. Another improvement is that Pikachu performs Quick Attack faster, with the move being less laggy. The move has seen some significant downgrades however. The move does not travel as far as in Smash 64 and its distance can no longer be extended by letting go of the control stick. The move also no longer has intangibility on startup, which makes it easier to punish during its startup and it hinders Quick Attack's overall utility. The move has also lost its extremely generous ledge snap window, which makes recovering from above especially a less viable option. Despite this, Quick Attack is still a great tool for recovering as it still travels a long distance and Pikachu still has many ways to mix up how it uses Quick Attack. The second jump requires a minimum rotation of 38 degrees. Quick Attack is one of the very few moves in Melee that stops knockback speed, which enhances its potential for surviving strong attacks.

In Brawl, Quick Attack is slightly slower and it has less range than in Melee. The move is particularly more laggy in the landing lag department as the move no longer auto-cancels once Pikachu enters free fall and the move now suffers from RCO lag, making Pikachu much easier to punish once it lands. However, Quick Attack is still a great recovery tool and Pikachu has gained a new powerful technique with Quick Attack called Quick Attack Cancelling. If Pikachu hits the ground with Quick Attack and hits jump, Pikachu will jump, ignoring the ending lag Pikachu would otherwise receive. The technique is considered a staple for Pikachu's metagame in competitive play as it allows Pikachu to effectively approach with Quick Attack and it can be used as a powerful locking tool against a missed tech.

If Pikachu takes a Poison Mushroom or is shrinking from a Super Mushroom during the first step of Quick Attack, it will perform an extra-high jump. This is assumed to be a glitch. [1]

Quick Attack returns as Pikachu's up special move in Super Smash Bros. 4. Its hitboxes now launch vertically and are quite a bit stronger which removes Quick Attack's locking potential however, the second hit can now be used as a combo starter. A noticeable downside Quick Attack has received in Smash 4 is that standard Quick Attack cancelling is no longer possible, although Pikachu can still edge cancel Quick Attack. Regardless, it still remains an important tool for Pikachu's approach and it is still one of Pikachu's most useful moves, as well as one of the best recovery tools in the game.

Quick Attack once again serves as Pikachu's up special in Super Smash Bros. Ultimate. It is functionally similar to its Smash 4 incarnation, and there is now a red arrow before Pikachu uses the move, indicating what direction Pikachu will travel. One notable downside the move has received however is that Pikachu can no longer edge cancel the Quick Attack, which hinders its utility when used near a ledge. Despite this, Quick Attack remains an important approach option for Pikachu and it has seen a couple of improvements. The main improvements the move has received is that it no longer suffers from RCO lag and Pikachu's body does not stretch as much when using it, making Pikachu harder to hit. As a result, it remains one of Pikachu's best tools, as well as retaining its status as one of the best recovery tools in the game.

Quick Attack being used by Pikachu in Pokémon Red.

Quick Attack is a physical Normal-type attack introduced in the Generation I Pokémon games. It's a rather weak move, with a low base power similar to Tackle and Pound. Unlike these other moves, however, it has +1 priority, meaning it will go before other moves unless the opponent uses a move whose priority is higher. Pikachu learns Quick Attack by leveling up and can be learned among early levels in any Pokémon game. In Pokémon Red and Green, Pikachu learned it at level 16, which was later reduced to 11 in Pokémon Yellow.

In the main Pokémon games, Quick Attack is commonly depicted as a single quick dash towards the foe, but the Pokémon anime often shows users of Quick Attack running in zigzag patterns to evade incoming attacks.

Pikachu's Quick Attack in the Super Smash Bros. series has a unique trail of electrical bubbles, which also deal electric damage, despite the attack being Normal-type in the origin games. In a similar matter, Skull Bash in Melee also has an electrical property attack despite not being an Electric-type attack. The option to "move" twice is also completely unique to Smash.

One of Pikachu's custom moves in Super Smash Bros. 4, Quick Feet, shares its name with an ability in the main Pokémon series, which increases a Pokémon's speed if it is under a status ailment. However, Pikachu has no access to this ability in any of the Pokémon games. It is, however, used by Jolteon, another Generation I Electric-type Pokémon.