From SmashWiki, the Super Smash Bros. wiki
(Redirected from RCO lag)
Jump to navigationJump to search

In Super Smash Bros. Brawl, the glitch is activated once the player grabs a ledge or if they get hit out of a special move which activates the glitch. Most moves which are affected by the glitch are ones which put an opponent into a helpless although not all moves which cause helplessness cause the glitch and there are a couple of moves which trigger the glitch despite not putting the opponent in a helpless state (such as Kirby’s Hammer and Stone).

Captain Falcon and Ganondorf also remain affected by RCO lag after they connect with Falcon Dive or Dark Dive respectively.

The only way a player can avoid the glitch is by landing using a special move with a landing animation although this is rather risky in most cases. The glitch can be mitigated by using the landing lag from an aerial to override the RCO lag, though with 35-40% more landing lag than would usually get for landing with that aerial (for example, an aerial with 9 frames of landing lag will have 13 frames of landing lag with RCO lag). The player has to land while the aerial has landing lag. If the player auto-cancels the aerial, they will get RCO lag. Preferably, one would use an aerial with lag to partially override the glitch, but still suffer more lag than the aerial would normally provide.

As there is no definitive way to override RCO lag, it is overall quite exploitable. It can make it considerably more difficult for characters who suffer from the glitch to get off the ledge safely, or to land. Additionally, a slew of additional, normally impossible followups can be performed against characters with RCO, especially against fast fallers. This can be setup with a move with weak vertical knockback, a move with horizontal knockback that lifts the opponent off the ground (but does not put the opponent into tumble), a meteor smash against an aerial opponent that does not put the opponent into tumble, a multi hit with drag down properties, a throw or an aerial grab release. With the exception of an aerial grab release in certain cases, these setups will put the opponent into their hard landing lag, allowing the player to set up a powerful punish. For example, the first hit of Falco's neutral attack normally lacks any guaranteed followups on its own but if the opponent has RCO, it can lead into a bunch of different moves, including a guaranteed forward smash if the opponent has enough RCO lag.

Characters affected by the glitch[edit] 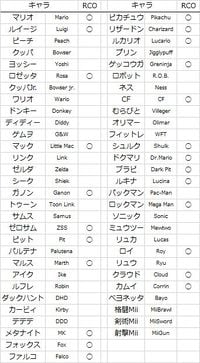 Characters affected in Smash 4 (note: Ryu is also affected by the glitch, but it only occurs to him whenever he enters his helpless state of Shoryuken and not during the post-move descent)

In Super Smash Bros. 4, the glitch no longer occurs after grabbing a ledge (with grabbing the edge flat out eliminating the glitch if it is active), which makes the glitch less prevalent and detrimental than in Brawl. The glitch also no longer occurs after a grab (with the exception of Yoshi's grab), which makes grabs less fatal against an opponent with RCO. The glitch does still occur if a player is hit out of their special moves however and multiple newcomers suffer from the glitch, in addition to many returning characters who already suffered from it. Because the glitch now only occurs when the player gets hit, the player will always go into their hard landing lag animation, unless they use a special move to land/carryover the RCO and then jump to get their soft landing (which will give them soft RCO lag). Any aerial used in an attempt to override the RCO lag will also experience increased landing lag, like in Brawl.

While it is still possible to exploit RCO lag, there are overall far less opportunities to do so, as there are ways to override the glitch. Horizontal and vertical launching moves can rarely be utilised, as opponents with RCO will rarely be grounded. Grab setups are no longer possible for almost the entire cast. Meteor smashes and multi hitting drag down moves like Mewtwo's neutral aerial however can still be utilised to lead into a guaranteed RCO hard landing for addition followups.

In Super Smash Bros. Ultimate, RCO lag has been removed for most special moves, making it even less common than in the previous game. However, there are still a few special moves which still suffer from the glitch (including Dolphin Slash, Blazer, Extreme Speed and Drill Rush) and for these few moves which still have RCO lag, the glitch functions like it did in the previous game although aerials no longer have extra landing lag.