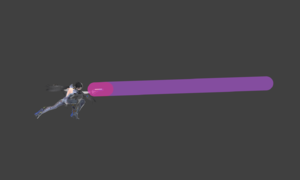 The Stiletto; Bayonetta rushes forwards. The move boasts moderate kill power, being able to KO middleweights at about 170%, quickly travels a far distance (slightly more than 1/3 of Final Destination), has moderately low ending lag, and can cross up shields at point blank range. However, it comes out rather slow and possesses no combo potential whatsoever, limiting its uses to cover landings, tech-chasing in some scenarios, and scoring a KO at high percents. Albeit not exactly a bad move, it gets outclassed by Bayonetta's other moves.

The bullet is shot from Bayonetta's right arm gun.

Up to 10 consecutive bullets can be fired by holding the button, with each one adding 7 frames to the move's duration. Otherwise, the Bullet Arts extension lasts 11 frames.

Uniquely for a dash attack, the move's travel speed is reduced by 0.8× for each opponent hit, with a maximum of 4 reductions in one use, much like Captain Falcon's down special.