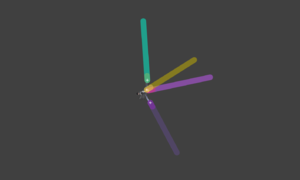 A bicycle kick. It is based on the kick launcher in Bayonetta. The Bullet Arts version of this move has her fire her guns, whilst she performs a modified version of the aú aberto, one of many cartwheeling kicks in capoeira. While this version deals less damage, it provides excellent coverage that covers wide areas around her, making it useful for edge-guarding and dealing additional damage. While it is decently fast for an up aerial (frame 9), its hitbox starts behind her, which can make it slower than it seems. However, one can perform a reverse aerial rush to take advantage of this, allowing multiple up aerials to combo into each other, potentially ending with a back aerial. Overall, up aerial has high utility, as it can initiate combos into specials if canceled early, and can also KO when close to the top blast line, although Bayonetta has to perform extremely high ladder combos for it to KO.

By holding the button, the extended portion can be executed up to 4 times in one use, for a total of 44 frames added to the move. Unlike with Bayonetta's neutral aerial, the bullet shots are accurate to the visuals from her guns, and follow their own timings instead of being synced with each loop. The leg hitbox remains consistently active throughout, but can only hit once.