From SmashWiki, the Super Smash Bros. wiki
(Redirected from Sourspot)
Jump to navigationJump to search

This article is about the most effective area of a hitbox. For the furthest point from which a character can grab a ledge, see edge sweet spot. 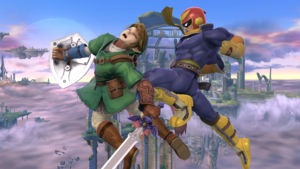 The sweet spot of an attack is the area of the hitbox with the most desirable knockback effect - usually, the most powerful part of the attack. For example, in Super Smash Bros. Melee, the sweet spot for most of Roy's attacks is the area of his sword closest to his body, while Marth's is at the end of his blade, called a tipper. Sweet spots are critical to learn to master a character. Most sweet spots on moves come out straight away, e.g. the move has 2 hitboxes, one with a sweet spot and one very weak one. However, the sweet and sour spots of some attacks, such as sex kicks, depend on timing rather than the hitbox's placement. In this case, most of the attack's duration is the sourspot and only a few frames are the sweetspot.

When an attack hits with its sweetspot, it is officially called a critical hit.

A sour spot is the exact opposite of a sweet spot; an area with the least powerful part of the attack, such as the tip of Roy's blade and the "jumping" portion of Luigi's Super Jump Punch.

While normally sour spot hitboxes are undesirable to land, they can occasionally be beneficial. This is usually due to them hitting in a vastly different trajectory, which can be more useful for certain situations despite the lowered knockback, or their weaker knockback allowing the move to combo into other moves when it normally wouldn't.

The following is a list of notable useful sour spots.