When the move is activated, Mega Man calls his robot dog, Rush, to battle. Rush activates a coil that any character can jump on to reach higher areas. After about three seconds, Rush will warp out of the battlefield. Similar to Sonic's Spring Jump, characters can bounce on Rush after he is set on the ground, which will launch the character higher than when it is in the air (or when initially used by Mega Man).

Also like Spring Jump, the move allows Mega Man to attack in the air after using it. Mega Man can also use his midair jump after Rush Coil if he has not done so already. However, the move has more ending lag than Spring Jump, making it less useful for offense. Even so, once Rush is on the ground he can be used for powerful combos, such as hitting an opponent with an up aerial, bouncing off Rush to chase them into the sky and then using another up aerial for a possible KO.

Rush Coil's trophy in Super Smash Bros. for Wii U

A faithful robotic dog created by Dr. Light, he can transform into vehicles and even fuse with Mega Man. You can use Mega Man's up special to call Rush to your side, bouncing off his built-in spring and flying high into the air. Rush will hang around for a bit, so spring up again if you want!

Mega Man's robotic dog Rush has many talents. He can transform into vehicles and even fuse with Mega Man, which is both cool and slightly weird. Even cooler is his Rush Coil function. Use Mega Man's up special to call Rush, jump on his back, and enjoy the extra boost you only get from a bouncy, robotic-dog back spring.

Beat's trophy in Super Smash Bros. for Wii U

A bird-shaped support robot created by the genius scientist Dr. Cossack. Beat first appeared in Mega Man 5, where he was available to use only after Mega Man collected all eight plates hidden throughout the game. He flies toward enemies and attacks, making him a trusted ally when facing both regular enemies and bosses.

A bird-shaped support robot created by the genius scientist Dr. Cossack. Beat first appeared in Mega Man 5, where he was available to use only after Mega Man collected all eight plates hidden throughout the game. He flies towards enemies and attacks, making him a trusty ally when facing both regular enemies and bosses. 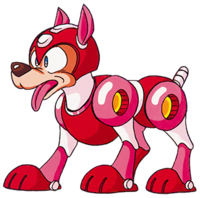 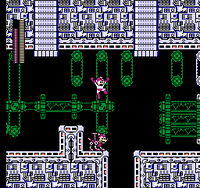 The Rush Coil, and Rush himself, first appeared in Mega Man 3. In this game, Rush could appear at any time, and give Mega Man a boost to reach a high platform. This would cost Mega Man three energy units. However, in later games, this move would only cost two energy units. Rush could also transform into a jet or a submarine.

One of the move's variants, Tornado Hold was introduced in Mega Man 8 as the weapon of Tengu Man. Using this weapon, a fan is placed on the ground to create a tornado to trap and possibly damage enemies. Alternatively, the power could be used as a barrier against projectiles or as a boost to access certain areas. Tornado Hold also functioned as Clown Man's weakness, tangling his arms and leaving him vulnerable.

The second variant, Beat, first appeared in Mega Man 5, designed by Dr. Cossack, the unwilling enemy of the previous game, to help Mega Man. In his original appearance, he acts as a weapon, automatically targeting enemies that get close to Mega Man, but this was changed in later games, as it was too powerful. His usual function thereafter as seen in Mega Man 7, Mega Man 9, Mega Man 10, and Mega Man 11 was to act as a safety net, saving Mega Man if he fell down a pit (and Proto Man in Mega Man 10). He could only be used a set number of times (excluding Newcomer Mode difficulty in Mega Man 11 which has unlimited usage) before having to be re-bought and could not save Mega Man from other instant death traps like spikes and crushers. In Mega Man 7 only, Beat had to be found and rescued before this ability could be used, but in Mega Man 9, Mega Man 10, and Mega Man 11 the Beat item could be bought right away.