When Rebel's Guard is used, Joker will assume a defensive pose with super armor from frame 3, and any hit dealt towards him will fill his Rebellion Gauge, and cause him to take 0.4x the amount of damage. Rebel's Guard's armor is active from frames 3-19 with an FAF of 31 normally, but the armor frames can be extended for up to 2 seconds (120 frames) if the B button is held. If hit, the armor frames extend, giving more time to absorb hits. Attacks that stun, such as Rathalos's Roar, won't stun Joker while Rebel's Guard is active. Taking 28.6% — roughly 2.689x more than normally — while Rebel's Guard is active will fill the Rebellion Gauge instantly. Similar to Revenge, this is affected by the 1v1 multiplier. Being frame 3, Rebel's Guard is Joker's fastest move, and is tied with his air dodge for fastest combo defensive option as well. Thus, Rebel's Guard has many situations where it's viable for use, including but not limited to escaping combos, absorbing hits from projectiles, and edgeguarding characters with poor recoveries. However, it should not be seen as a substitute for air dodging or shielding, as it's extremely punishable if the gambit fails.

When the player releases the button within 33 frames of being hit, Joker will perform a backhand, knocking the opponent away from him and dealing 2.4% and fixed knockback. Joker also has intangibility on frames 1-14 during the backhand. There are no true followups to the backhand in this scenario, although frame traps and general pressure can easily be executed, such as instant dash attack or precise use of back aerial. It is possible to counter the backhand if the player doesn't release it quickly enough, although these scenarios are few and far between, and the benefits to doing so are questionable.

If Arsène is present when this move is inputted, Joker will instead use Tetrakarn (テトラカーン, Tetrakarn) or Makarakarn (マカラカーン, Makarakarn), depending on what attack is being used against him.

Tetrakarn is activated when the opponent uses a physical attack against him, causing Joker to counter the opponent with 1.6x the damage, with a 12% minimum. Furthermore, Tetrakarn has a 4 frame startup (among the fastest in the game) and a FAF of 57, making it extremely fast and harder to punish compared to other counters. It is also the most damaging counter in the game, beating out King K. Rool's Gut Check and Mii Brawler's Counter Throw's 1.5x damage. Tetrakarn is also known for its notoriously large hitbox, which covers Joker's entire body and reaches a good distance around him due to the counterattack's particle effect. This makes it effortless to edgeguard recoveries with hitboxes, even from the ledge, unlike many, all while dealing very high damage.

If a projectile hits Joker instead, he will use Makarakarn, and reflect the projectile with 1.6x the damage and 1.9x the speed. This makes it one of the strongest reflectors in the game, only being beaten out in damage by Reversal Slash, Ness's forward smash, and Left Splits Kick. The speed of the reflected projectiles and activity of Makarakarn itself make it very difficult for opponents to try and play reflector wars against it, usually resulting in them losing. The large hitbox still exists as well, meaning Joker has a solid defense against coordinated assaults as well. The reflector searchbox is also larger than Tetrakarn's counter searchbox, being notably higher vertically. 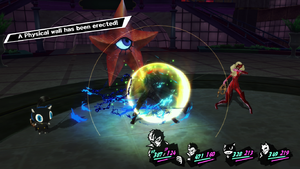 Joker casting Tetrakarn on himself in Persona 5.

In the Persona series, guarding both reduces damage and prevents attacks that exploit the user's elemental weakness from downing them.

The stance Joker takes while using Rebel's Guard is nearly identical to his animation in Persona 5 when selecting a Persona skill, complete with a similar blue, flame-like aura around his feet. In Persona 5 Royal, Ryuji performs a similar action when defending the protagonist and Akechi from an attack by a berserk Cendrillon.

Tetrakarn and Makarakarn are recurring support skills in the Megami Tensei franchise, first appearing in 1992's Shin Megami Tensei. Originally, Tetrakarn would simply block any single physical attack that hits the user's party, while Makarakarn would block any single magical attack that connects. Later games, including Persona 5, would change this to have Tetrakarn and Makarakarn reflect the attack back at the caster. In Persona 5, Arsene cannot learn either move normally, but can inherit them from other Personas via Skill Cards or Fusion. The sound effects they use in Super Smash Bros. are taken directly from their usage in Persona 5.