From SmashWiki, the Super Smash Bros. wiki
< Gun
Jump to navigationJump to search

This article is about Joker's neutral special move. For other guns, see List of firearms.

On the ground, Gun has various options:

All of this functionality is retained if the gun is used in the air, and Joker also gains two new options. However, Joker cannot jump out of Gun, instead needing to end the move before jumping.

Additionally, the Gun stalls Joker in the air when used, which can be used in conjunction with a double jump to let him go under stages like Battlefield[1]. Outside of this, the aerial Gun dodges can be used to recover horizontally in certain situations, which can easily be boosted in viability with Arsene.

If Arsene is present, the attack is upgraded to Gun Special (ガンスぺシャル, Gun Special), and Joker will fire three bullets with each shot when firing straight forwards. The other two methods of firing become stronger, as well. The "bullets" have increased knockback values as well, making them much more favorable for forcing tech situations. The damage is also quite high and racks up quickly, allowing for Joker to force approaches effectively in a way similar to Fox's Blaster.

Much like Bayonetta's Bullet Arts, the bullets are not projectiles, but rather indirect attacks with large disjointed hitboxes. As such, they cannot be reflected or blocked by passive shields. Unlike Bullet Arts, these bullets can actually cause flinching. Due to this, they can force Counter attacks to trigger, allowing for some interesting offensive pressure.

Joker executing a simple Gundash. This was executed through using the Gun shortly after executing a short hop, which is considered to be the best execution method for beginners.

When dodging while using the Gun in the air, if Joker hits the ground, he will slide a long distance, akin to a wavedash; this is known as Gundashing. The distance travelled is influenced through the player's timing and is reduced with repeated usage due to the Gun's built-in dodge staling mechanic. Like with wavedashing, the closer to the ground, the longer the distance; thus, timing it as late as possible rather than buffering it is crucial. Because the Gun dodge's animation plays throughout the Gundash, all Gun options (eg. jumping, additional dodges) remain available during the slide.

Due to the length of time it takes to pull off, as well as Gun's nature as a "reset button" type of attack, Gundashing's utility is limited. Its most notable utility is as platform movement, as using it out of a full hop usually gives Joker maximum distance while still landing the relevant chip damage Gun provides. For similar reasons, it can function as a pseudo-ledgedash, which is especially useful if Arsène is active thanks to the higher knockback sending foes into tumble much earlier. Offensively, Gundashing can be used for lock setups; with Arsène active, it can also be used to prompt juggle situations. Generally, Gundashing should be seen a momentum-enhancing technique that adds flow to Joker's gameplay, rather than something used as a staple option.

However, Gundashing remains niche for a multitude of reasons. The setup is very slow and, despite the intangibility, it remains punishable if used liberally; ergo, it can be unwieldy to use. This is somewhat worsened by the Gun's weak hitbox without Arsène, which makes it difficult to use offensively without being up-close in the first place. Largely requiring a jump prior to usage also makes it much more committal than it lets on as well, making it somewhat vulnerable to anti-airs. These factors make Gundashing a niche, situational technique, though it remains effective in said situations.

Joker attacking with Down Shot in Persona 5 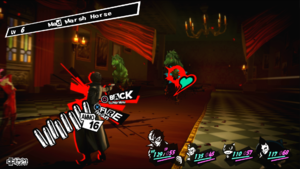 Joker using a gun in battle in Persona 5

Firearms are a class of weapon used in several Megami Tensei games, including every main game in the Persona series. In Revelations: Persona and Persona 5, all party members carry both a melee weapon and a firearm they can switch between in battle. In Persona 5, party members can pull out their gun during their turn in a battle and fire it as many times as they wish until the current magazine runs out. The exaggerated, cartoonish muzzle flash in Smash Bros. closely resembles the one used in Persona 5 for most gun attacks.

Joker uses semi-automatic pistols, while the other members of the Phantom Thieves use different types of firearms. While they are actually realistic models and not genuine guns, the nature of the Metaverse allows them to function as if they were real. The gun Joker uses in Smash Bros. is his initial gun in Persona 5. Referred to in-game as the Tkachev, it is based off the Type 54, a Chinese copy of the Tokarev TT-33. Joker's gun in Smash Bros. uses the same sound effects as his guns in Persona 5.

Joker's neutral stance when firing in Smash Bros., with his knees slightly bent and the gun tilted to the side, resembles a left-handed version of one of his animations when using Uchikomi, a special gun attack he can learn from Confidant Hifumi Togo. The acrobatic maneuvers he can perform when using Gun is likely a reference to the Down Shot special attack he can learn from Confidant Shinya Oda, an elementary schooler who is a light gun game prodigy. The animation for Down Shot shows Joker gracefully dodging and leaping into the air while firing at the enemy.

The blue muzzle flash from Gun Special resembles the ethereal blue the Persona series uses to represent Personas. The attack may serve as a reference to Snipe and Cripple (renamed Gun Boost and Gun Amp, respectively, in Persona 5 Royal), two skills Personas can learn in Persona 5. Snipe and Cripple both passively boost the damage of all gun attacks. Arsène does not learn either normally, but he can be taught them via Fusion or Skill Cards. Gun Special may also reference other elements of skills that Joker can learn from Shinya; Down Shot shows Joker firing his gun in three-round bursts, downing the enemy. Additionally, Down Shot is referred to as Gun Special in the battle menus of Persona 5. Upon reaching Rank 10 of the Confidant, Joker learns the Oda Special, a skill that allows his bullets to ignore an enemy's resistances. It could also be a reference to the skill Triple Down, which hits all enemies with gun damage three times.