For other usage of ladder, see Ladder (disambiguation). 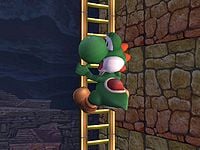 Yoshi on a ladder in Brawl

Bayonetta on a ladder in Smash Wii U

While on a ladder, characters are considered to be in the air, so they are immune to sleep and other such effects. All characters have the same speed on ladders, and multiple characters can occupy the same space on a ladder. Additionally, grabbing onto a ladder restores all of a character's jumps (with the notable exception of Pac-Man, for unknown reasons), and they can grab it even if they are helpless.

Ladders appear in the following stages:

While on a ladder, in Brawl and for Wii U, characters cannot do anything other than climb, descend, or let go, which leaves them vulnerable to attacks if they remain on the ladder. Starting in Ultimate, however, they can also use aerial attacks while remaining stationary on the ladder, a property known officially as a ladder attack, giving them a means of fending off attackers.

Any aerial attack can be used while on a ladder, though some cause the user to let go of the ladder, namely: