From SmashWiki, the Super Smash Bros. wiki
(Redirected from Strong attack)
Jump to navigationJump to search 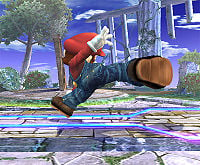 A tilt attack (強攻撃, Strong attack) (officially strong attack prior to Ultimate, referred to as power attack in the How to Play video of SSB), or known simply as tilt, is a ground attack performed by lightly pushing and holding, or "tilting", the Control stick or D-pad in a direction and pressing the attack button, without smashing it as for a smash attack. The easiest way to perform a tilt attack is to press the attack button while walking or crouching. Like smash attacks, there are three tilt attacks: a forward tilt, an up tilt, and a down tilt. Some forward tilts can be angled.

Tilts typically have good range and weak knockback at low percentages, keeping opponents in place for follow-up attacks. Many tilts are used at mid-range percentages to keep opponents at a distance. Most have enough knockback scaling to KO at very high percentages, and can be effectively used as such in Sudden Death, although they are otherwise unable to KO at realistic percentages in comparison to most aerial attacks or smash attacks, with only a few such as Falco's down tilt and Ike's forward tilt being able to do so. They tend to also come out quickly, though they generally have more cooldown than neutral attacks.

Kazuya notably does not have the standard set of three tilt attacks, but rather a massive plethora of tilt attacks based on all eight directions, along with moves that can only be performed from a 'full' crouch.

to perform a strong attack. Different attacks will be launched depending on the direction you tilt