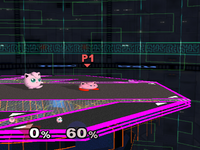 The Flat Kirby glitch in action.

The Flat Kirby glitch is a glitch in Super Smash Bros. Melee that causes Kirby to become flatter each time it is used.

The glitch occurs when Kirby and an opposing Jigglypuff hit each other with a fully-charged Rollout and the Kirby has just landed from a jump (whereas the Jigglypuff was on the ground the entire time). With the correct timing, Kirby will become slightly flatter. This can be repeated for Kirby to grow very flat and wide, which lasts until he is KO'd. The glitch is easiest to perform on flat stages such as Final Destination.

The glitch is likely caused by Kirby's "flattening" animation as he lands on the ground being interrupted by the clanking of the two attacks, even though the animation does not appear to play (as Kirby is using Rollout). It is likely the glitch could occur in other situations where Kirby clanks with an attack as he is landing. Since Kirby has no moves that can cause this situation (it must be executable in the air but will not be interrupted by landing), the possibilities are limited to copied attacks; more specifically, Giant Punch, Warlock Punch, Falcon Punch, and Rollout.

It is unconfirmed whether the glitch exists in Brawl or Smash 4, which is considered unlikely due to the different animation system. The glitch is also unlikely to work in the original game, with Giant Punch, Falcon Punch, and Pound being the possible culprits.