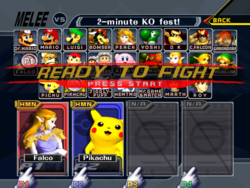 The glitch in action, showing a Zelda costume over Falco's. 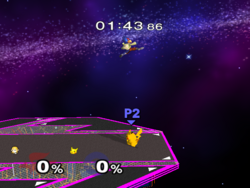 The glitch once the match has begun.

The stock glitch is a glitch in Super Smash Bros. Melee that allows the player to play as a character with the stock design of another character.

To perform the glitch, the player must first select the character they wish to play as. After this, they must hit the B button once, then hover their selection marker over another character without pressing the A button. Instead, they must press the Y button once, which selects the previous costume of the hovered character, then press L + R + Start to return to the main menu. After this, they must go back to the mode they were previously selecting a character for. If done correctly, the glitch should occur, and display a wrong character picture over the correct name on the selection screen; this displayed costume is the one which stock icon will be used for the selected character in the match. Changing characters or costumes will fix the glitch.

The stock glitch was discovered in 2009 and can be seen in both tournament and friendly matches, mostly for humorous effect.

Using the L+R+Start combination to quit the selection screen and return to the main menu, following by returning to the same character selection screen, results in the game combining the character that was selected with the costume that was hovered. For example, if the hovered costume is number 3, then the selected character will end up wearing their third costume upon re-entering the selection screen. In most cases this just results in an unexpected costume choice. However, if the selected character has fewer costumes than the hovered selection - for example, they only have 4 costumes, but are being instructed to load costume number 5 or 6 - then the game ends up loading another character's matching 5th or 6th costume.

Due to how costumes are selected, it is not strictly necessary to use the Y button when executing the glitch; it is merely the most effective way to get a costume number that the selected character lacks (as it picks the last costume).

As the glitch only works if the selected character has fewer costumes than the hovered character, characters that have the maximum six costumes - namely, Yoshi, Kirby, and Captain Falcon - cannot have the glitch used on themselves, and they are the only way to get a "sixth costume" result. The character loaded appears to be selected by looking backwards through the debug menu order and using whatever comes first that has a valid 5th or 6th costume, suggesting that if the glitch did work on Captain Falcon (the first one in such order), the game might crash.

Sheik is not selectable. As a result: