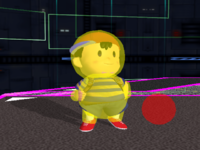 Ness taunting alongside the disconnected yo-yo hitbox, seen in red.

The yo-yo glitch refers to a glitch in Super Smash Bros. Melee done using Ness's yo-yo. It can be used to attack or grab with near limitless range or attach certain single-hitbox attacks to Ness's body. The discovery of the glitch was a collaborative effort between VilNess, LonelyNess, and Dan Smith, and was spurred on by an innocuous video of an unknown Japanese player accidentally dropping a yo-yo hitbox.

The glitch can be performed in all versions of Melee.

Ness's up smash consists of 3 states each with its own hitbox: outreaching, spinning, and swinging. The yo-yo glitch drops the last hitbox of the up smash onto the ground and leaves it there until Ness gets KO'd or uses a non-projectile attack. Opponents can get hit by a dropped yo-yo hitbox or a jacket exactly once. Additionally, if an opponent does get hit by either, then the very next set of non-projectile hitboxes Ness uses also cannot hit that opponent (first hit of a multi-hit attack, such as forward aerial, will whiff that opponent, but the following hits can still connect).

This glitch works with down smash accordingly but requires that said down smash attack be canceled in its ending frames by an attack or effect (such as a Mushroom).

After using the yo-yo glitch, certain other attacks can be used to replace the yo-yo hitbox with the hitbox of the attack used. The rules of the regular yo-yo glitch still apply when using a jacket.

Hitting something with the yo-yo creates a special delayed hitbox refresh event. The purpose of the hitbox refresh is to allow a charged smash attack to hit a single target multiple times, while the yo-yo is spinning on ground. However, the refresh event is missing an important detail that normal hitbox creation events always have: it doesn't setup Ness to have his hitboxes removed when his state changes. Thus, the refreshed yo-yo hitbox can stay active after the smash attack has already ended.[1]

It is also possible to do the yo-yo glitch with down smash. The move must connect with either the extension hitbox, or the charging hitbox. After this, it must be interrupted during a small window where the yo-yo has a hitbox during retraction. The window varies based on charge time, from 1 frame with no charge, increasing up to 12 frames for every frame spend charging after the hitbox connects. Charging for 12 or more frames will not allow the retraction hitbox to appear at all, and therefore not give any possibility of activating the glitch.