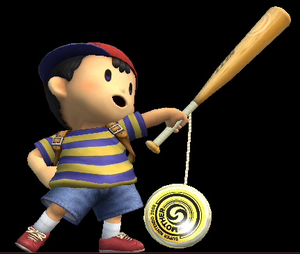 A picture of the glitch. 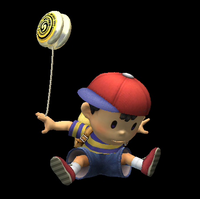 Another picture of the glitch.

SLAPAYO is a glitch in Super Smash Bros. Brawl. Naruto[NU] first discovered the glitch on March 30th, 2008. However, on May 4, 2008, the SLAPAHO crew provided the first documented evidence of the creation of the glitch.

The details of the glitch are still uncertain, and there are many questions after reviewing the video. Unfortunately, in their haste to have video evidence of the glitch, SLAPAHO quickly ended the match with little experience of the glitch itself so the replay could be saved.

What is known is that it involves Ness being hit by an attack of equal or higher priority while his yo-yo is outstretched. Shortly before impact, Ness must release the yoyo. The animation will be canceled, causing the yo-yo to fail in retraction, effectively leaving the yo-yo limp at Ness' side. The yo-yo appears to retain its charging hitbox, which only hits an opponent or damageable object once, very similar to the function of the Turnip glitch.

One of the players must be Ness. The glitch can be done with any stage, and most other characters. Ness must charge his up smash, and the up smash must be hit by an attack. Then, Ness must release his up smash, and the same attack must hit Ness during this time, thus canceling the animation of him putting away his Yoyo. Ness will then appear to be dragging his Yoyo around. If Ness passes through a platform, then the Yoyo will be "caught" and will appear to be stuck on the platform. It will automatically go back to Ness if it finds a clear line between it and Ness. If Ness gets KO'd, then the Yoyo will be stuck under the stage. It can still go back to Ness if he finds a clear path between himself and the Yoyo. The glitch has little competitive use, as it will only damage an opponent once (and weakly, only doing 4%). After this, the Yoyo will still be dragged around, but will not do any damage. The glitch ends when Ness uses his up or down smash again.

A similar glitch occurs in Melee when Dr. Mario reflects a Poké Ball to Mario, where Mario's cape "breaks" and his cape hangs out the entire time.