Pellets are items in the Pikmin universe used to generate Pikmin when transported to the Onion. 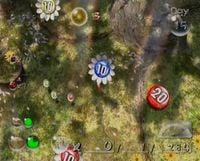 They are created by hardened nectar from Pellet Posies, which, when attacked, will drop the pellets. In Pikmin, the number on the pellet signifies how many Pikmin are required to carry it. They grow inside flowers called Pellet Posies. Pellets come in three colors: red, yellow, and blue (each corresponding to an onion of the same color); and in four sizes: 1, 5, 10, and an exceedingly rare 20. Pellets gradually increase in size if left to grow on their posies.

An 8 pellet was introduced in Hey! Pikmin and is not only exclusive to that game, but the only pellet size available in it. 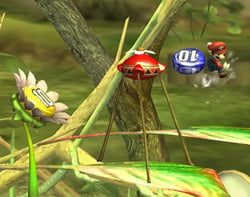 Mario throwing a Blue 10 pellet into a Red Onion. A Yellow 10 pellet Posy is also in view.

In Super Smash Bros. Brawl, Super Smash Bros. for Nintendo 3DS, and Super Smash Bros. Ultimate they appear only in the Distant Planet stage. Pellets can be used either as projectile weapons (causing damage proportional to their size), or they can be thrown into an Onion to produce various items. Higher numbered pellets also deal more damage and knockback when thrown.

Any kind of pellet can be thrown into any Onion, but if the color of the pellet matches the color of the Onion, then extra items will be produced. It is a common misconception that better items are received for matching colors or larger pellets, but in fact, only the number of items spawned changes.

Unlocked by successfully completing the Challenge to clear Target Smash!! level 2 with 10 characters.

Pellets
Items that contain concentrated essence of the Pikmin's home world. This essence is the keystone to all life on the planet. Harvested from pellet grass or flowers, Pikmin can take pellets back to Onions to produce more Pikmin. If the Onion and the pellet are the same color, it produces more Pikmin. The number on the top of a pellet tells how many Pikmin must carry it.

Pellets's trophy in Super Smash Bros. for Wii U

A crystallized nectar that contains the essence of the Pikmin's home world, these pellets are most often harvested from the plant life of the planet. Each pellet displays a number on its surface, and this number may increase over time. The Onion generates more Pikmin with bigger numbers.

A crystallized nectar that contains the essence of the Pikmin's homeworld, these pellets are most often harvested from the plant life of the planet. Each pellet displays a number on its surface, and this number may increase over time. The Onion generates more Pikmin with bigger numbers.

The crystallised essence of the Pikmin's home planet. You'll need these things if you want more Pikmin, so harvest them by attacking the Pellet Posy they come from. By the way, keep an eye on the number on the front – it goes up little by little, and the higher it goes, the more items you'll get when you lob the pellet at an Onion!