This article is about the hitbox visualization in Super Smash Bros. Melee. For the move itself, see Reflector (Fox).

The hitbox of Fox's shine. 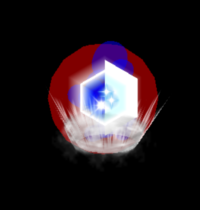 Fox's hitbox and intangibility can be seen on frame 1.

Fox's Reflector, known informally as a shine, can reflect projectiles that are fired on Fox back at the opponent. Fox can also use the reflector as a direct attack, knocking opponents on a set semi-spike trajectory.

This move is widely considered the best move in the game, as well as the primary factor in the advancement of Fox's metagame. It comes out in one frame without any delay and has set knockback and hitstun, allowing it to be used for edgeguarding; gimping an opponent with this move is called a shine spike. By jump canceling the shine, which allows him to wavedash out of it, Fox can follow up with other moves such as a neutral aerial, up tilt, up smash, or another shine, allowing it to be used as a combo starter, extender or finisher at any percent.

The shine is also known for its fantastic ability to pressure shields. Due to the shine's ability to be jump-canceled, Fox can perform a technique called the multi-shine, where he can use several shines in a row without leaving the ground; Fox can use SHFFL'd aerials in the mix to force opponents to react as well. Fox can also use the initial frame of invincibility and jump cancel the shine into a grab (known as shine grabbing) to safely grab opponents. Even if he misses the shine as an attack, Fox can safely jump away from the opponent and force a reaction.

The only flaw with the Reflector is that it will shatter if it bounces back the same projectile too many times due to an upper limit to how much base damage the reflected projectile should have before making contact with the Reflector. When this happens, Fox will go through the stun animation and be completely vulnerable to attack.

Turning around disables jump-canceling for 3 frames. These frames will always reflect, regardless of release time. If the reflect window was increased that way, the ending lag will also increase by the same amount.

* Rounded up to the next whole number