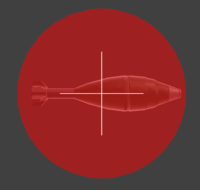 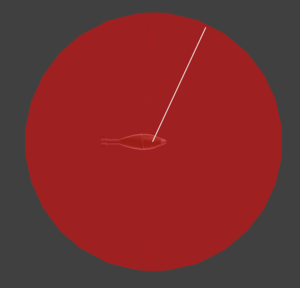 Snake takes out a mortar launcher and shoots a mortar missile upwards. The missile will always land directly in front of Snake when it comes down. Unlike grenades or C4, Snake will not be hurt by the missile's explosion. Uniquely, charging the move does not increase its power but it does increase the height at which the missile travels allowing for very high vertical range. An excellent move for ledgetrapping, edgeguarding, and as an anti-air, the launcher also has a hitbox that comes out on frame 11 and confirms directly into the missile, which gives it potential as an out of shield option. If the missile itself hits a shield, it is +1, making it a good tool for pressuring and allowing it to be used as part of possible shield break setups.

Its ledgetrapping and edgeguarding potential allows it to cover several if not all of the opponent's ledge options if used along with grenades and C4 due to how long the mortar stays in the air, and it can even KO at high percents due to the mortar's powerful explosion. It also has some combo potential (although this depends on the player's current position), allowing it to confirm into neutral or down aerial or be confirmed into from one of Snake's throws for high damage.

Lastly, its potent anti-air and stage control properties stem from its ability to allow Snake to control platforms easily as well as to cut off certain parts of the air to prevent opponents from traveling in that direction to avoid being hit by the missile. Charging the missile to increase the height makes this even more effective.

On the other hand, the move has a few shortcomings. One of these include the period between when the launcher comes out and when the mortar missile is fired. While the launcher hitbox comes out at frame 11, the mortar missile itself does not come out until frame 35. This essentially leaves a 24 frame time window where Snake is completely vulnerable and can be hit by the opponent before the missile is launched. Therefore, a skilled player must know when there is an opportune time to use the move is in order to avoid getting punished.

The missile and explosion can also be reflected and absorbed, respectively. This allows characters with reflectors to use the missile against Snake. Characters with absorption based moves can heal themselves (Ness and Lucas) or possibly use it as part of a devastating attack against Snake if they manage to absorb several explosions (Mr. Game & Watch).

Overall, it is one of the best and most unique up smashes in the game due to its pressuring, ledgetrapping and stage control capabilities, while also possessing decent KO power. It works very well when used alongside Snake's other projectiles for setups, zoning, ledge situations or edgeguards. However, the move's long period of vulnerability between the launcher and missile means that using it requires clever use in order to not get punished for attempting to use it or have it be used against Snake. Regardless, it is an extremely versatile and flexible move in Snake's moveset.

Unlike other smash attacks, charging this move does not increase its damage, but instead shoots the mortar shell with more speed, consequently increasing its travel distance as well.

The timings for the mortar shell below are when it is fired from and lands at ground level with no charge; otherwise, the detector can last up to 300 frames.