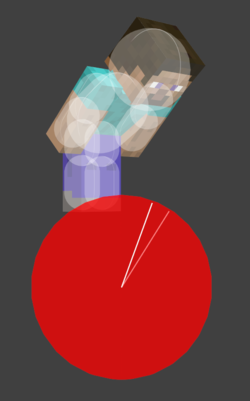 Hitbox visualization showing Steve's down aerial with the hitbox relative to him. Hitbox visualization showing Steve's down aerial with the hitbox relative to the anvil.

The Roblox Rush is an advanced technique discovered and named by smasher Tytaneum that allows Steve to utilize new movement approaches. There are many ways to activate a Roblox Rush, but the general requirements for the technique is that steve must attack an entity while pushing into an Anvil. If done successfully, Steve will be rewarded with a large horizontal burst of movement in which he is fully actionable and can surprise opponents. The easiest way to achieve these conditions is by dropping an anvil next to the crafting table, as the crafting table counts as an entity. Steve can either burst forwards or backwards depending on his position relative to the anvil as well as the direction he is holding. The Roblox Rush is likely a byproduct of a strange interaction between hitlag and the anvil's collision box, causing the anvil to eject steve once the hitlag ends.

There also exists an alternate version of the Roblox Rush that may be achieved by simply running into a grounded anvil and quickly rolling backwards, significantly boosting the distance which Steve rolls.

Anvil shorthopping refers to an advanced technique discovered and named by smasher Tytaneum which allows Steve to bypass the regular endlag of anvil in specific situations. When landing on the ground with anvil, Steve normally suffers a landing lag of 18 frames. If a jump is inputted exactly two frames before landing with the anvil, Steve will execute an extremely low-height jump which allows him to re-land on the anvil almost instantly, leaving him fully actionable. He may then use any move, increasing the safety of anvil massively as well as improving its offensive potential. Another extremely relevant application of this technique is when landing on an opponent or their shield. Steve may execute this exact same technique while the anvil is in hitstop (as in, frozen temporarily as it connects with the opponent or their shield) in order to gain full actionability upon hitting the anvil. This is executed in the exact same manner, in which Steve must input jump 2 framed before the anvil connects with the opponent or their shield. If done successfully, Steve may instantly down-smash as soon as the anvil's first hit connects, causing an instant shield break if the anvil's first hit, landing hit, and down-smash connect.

The applicability of this tech is highly limited due to its essentially frame perfect nature; however, the Steve player may benefit from attempting the technique every time they land with an anvil or connect it with an opponent as there is little to no consequence for failing the technique, while there is a massive potential reward for successfully pulling it off.

The move uses up one unit of iron, out of three Steve starts each stock with, and a maximum of 100 units shared with dirt, wood, and stone. It fails if used with no iron left, or if an anvil from a previous use is still active.

The timings below are when the anvil does not land on the ground. The move resets Steve's horizontal momentum when initiated, then causes him to stand on top of the anvil when it is generated, which falls straight down using its own physics. Steve is considered to be grounded while on the anvil, and can perform grounded actions on it after the animation fully plays out; he can also use it to restore his air dodge or double jump, but the latter only if he does not jump cancel the move.

The anvil is active on the ground for 90 additional frames after the landing lag period. If landing without Steve on top, it is only active for that 90-frame period.