It functions like a mix between Donkey Kong's Giant Punch and Little Mac's Straight Lunge, being a powerful chargeable attack that can be stored and grants super armor during a fully-charged swing (similar to Giant Punch) while not having any increased damage unless fully charged and being weaker in the air (like Straight Lunge).

When used, the Brawler begins charging automatically as their fist gets cloaked in a blue aura, which then turns purple as the charge completes. When the special move button is tapped again during that period, the Brawler unleashes a powerful jumping uppercut. It is similar in function to any auto-charge special, allowing the Mii to preserve a charge by charge-canceling; however, unlike many auto-charge specials, the base power of the uppercut does not increase in power at any point during the charge--only the maximum-charged version does more damage than the uncharged version.

The Mii is able to shrug off weak attacks during an uncharged punch, while a fully-charged uppercut grants super armor until the move completes. This allows the punch to act as a sort of counterattack, though the Brawler will still take some damage from the opposing blow. The move also negates all of the Mii's momentum if used in the air, leaving them helpless and resulting in an SD if they are over a pit. An aerial uppercut, though much weaker than a grounded one, does also provide a short hop, resulting in some slight upward momentum.

In Ultimate, Ultimate Uppercut was replaced by Flashing Mach Punch. 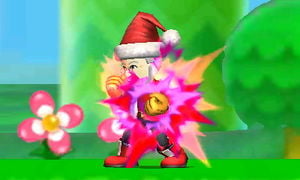 In rare cases, if the Mii Brawler uses the attack at the same time it is hit by another opponent, its fist will still be flashing, just as if the Ultimate Uppercut move was charging (blue) or in use (purple).