Not to be confused with Plasma Wisp or Plasma Whip. 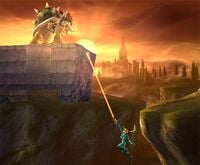 Zero Suit Samus fires her whip upwards, pulling anyone above her downwards. If used on someone who is on the ground next to her, it will knock them up, hitting multiple times, until they hit the end, at which point it will pull them back down. If used on an airborne opponent while off the stage, it will pull them down and they will keep going, effectively spiking them, though the tip of the Plasma Wire must connect with the opponent to cause this effect. The player can chain this move multiple times to accumulate damage, and teching out of it can be difficult. However, the timing is harder to get as the damage goes up.

The Plasma Wire can tether recover to any ledge above Zero Suit Samus, automatically grappling it. If the ledge is at or below the horizontal, however, it will not grapple to it.

If the player jumped off the edge but has not used their second jump, using this move will make them move upwards slightly.

Both the Plasma Wire and the Plasma Whip are unique to Smash, and have no presence in any Metroid game but it could be a reference to the Grapple Beam which Samus uses in her Power Suit.