Pikmin Chain (ピクミンつながり, Pikmin Link) is Olimar's up special move in Super Smash Bros. Brawl. Captain Olimar creates a chain of Pikmin and uses it to latch onto a ledge. It functions as a tether recovery.

Pikmin Chain being prevented due to being edge-hogged

The distance covered by the chain is dependent on how many Pikmin Olimar has, and can either have an extremely long range or be useless. It has a little vertical rise, but can be used to pseudo-spike edgehogs. It does not reorder the player's Pikmin. When used on the ground, Olimar shoots the Pikmin chain diagonally up like in midair, giving small damage and knockback to whoever it hits, in return for being one of several attacks to hit aerial opponents at an angle from the ground. The effect of the chain on the opponent varies based on the next Pikmin in line; a yellow Pikmin as the next in line will cause electrical damage and minor knockback, a red Pikmin will cause fire damage and minor knockback, a white Pikmin will cause poison damage and minor knockback, and purple or blue Pikmin will cause more damage and still more knockback, respectively. Red Pikmin deal 7%, blue deal 6%, yellow deal 6%, white deal 6%, and purple deal 8%. Tapping down after the chain has fully stretched will recoil the tether quicker than letting it recoil naturally.

There is a glitch that causes the chain to remain in Olimar's hand, all Pikmin extended, but in a downward position. They will stay in his hand until he lands. The cause is so far unknown, but is theorized that it either when the chain falls just short of the ledge, causing the game to think that it's both still in Olimar's hands and not attached, or it may attach at the greatest downward angle possible, then Olimar is pushed out of range by upward wind.

There is another glitch caused by repeatedly and quickly using the move off an edge. After using it several times, Olimar will only use a few Pikmin and rest seem to "disappear." But once he lands, they will reappear, and if he falls below the bottom blast line, the ghosts of the Pikmin will appear at the ledge.

In Pikmin 2, leaders can command Pikmin to move them around themselves; if the Pikmin are commanded in one direction, they will gradually form a single file line that can reach a great distance if many Pikmin are in the leader's squad. This line can then be rotated around the leader to direct Pikmin over enemies or treasures they bump into and begin attacking/carrying them. This may have been streamlined into the Pikmin Chain, where Olimar's Pikmin form a line (the more Pikmin in his squad, the longer the Chain) and reach out for an objective - in this case, the ledge. 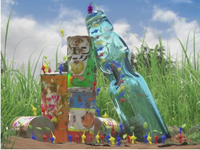 A part of the short Treasure in a Bottle where the Pikmin chain together.

Though this move is a Smash original, it has been seen after Brawl's release. In one of the Pikmin Short Movies, Treasure in a Bottle, the Pikmin try to help a red Pikmin who gets stuck inside a bottle. At the climax of the short, they go inside the bottle and chain together to reach the stuck Pikmin and save it. The way the Pikmin do this is very reminiscent of Pikmin Chain, as they all chain together in a similar fashion; however, this may simply be a coincidence.