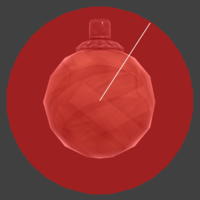 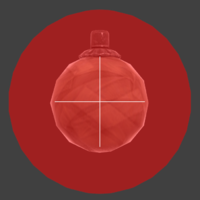 The throw's base damage is always 1%, whereas the detonation's windboxes deal damage equal to the speed the grenade is moving at during each hit, following the item throw damage formula, for around 0.1% to 0.9% per hit. Likewise, the explosion deals 12.6% damage, equal to 13 - 0.4 via the formula.

Per the item throw damage formula, the damage of the grenade when thrown is equal to 5 - 0.4 + throw speed.

The following timings are when the grenade is detonated as soon as possible. In the air, the move enables ledge grabs from both sides as soon as Sheik lets go of the grenade.

This applies if the move is attempted to be used again while the previous grenade is still active (but not if dropped and picked up as an item). If used in the air, Sheik experiences hard landing lag upon landing instead of transitioning to the grounded version.