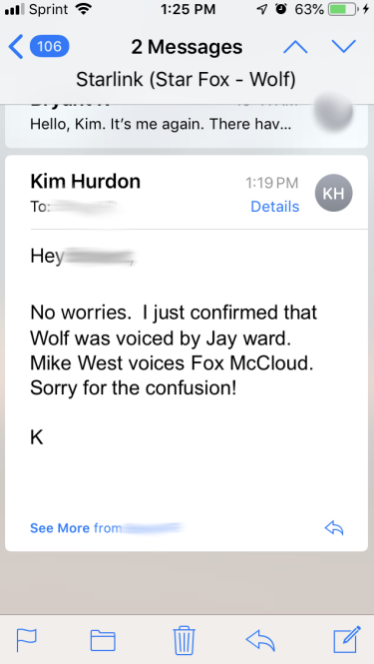 It's Jay Ward. According to this at least https://www.behindthevoiceactors.com/video-games/Super-Smash-Bros-Ultimate/Wolf-ODonnell/ Wolff (talk) 14:26, 17 January 2019 (EST)

Why does Wolf's section have 20+ names? The game hasn't even been out for 6 months and there are players listed whose best achievements are placing 49th or having them as a "strong secondary". PokemonMasterJamal3 (talk) 07:21, 13 February 2019 (EST)

For the notable players section, me and Aidan agreed that GENESIS 6 was probably the best place to start the "notable players" section especially since 1. the game had been out for 2 months and 2. GENESIS 6 was the first supermajor. As for the 20+ names... I wasn't the one who added them. Definitely remove most of the non-notable ones. SugarCookie 420 07:31, 13 February 2019 (EST)

I'm still iffy on having a notable players' section this early in the game's lifespan, but I'm willing to let it slide for now. My primary issue is with the sheer length of names, because "a strong Wolf secondary" and "49th at x tournament" are blatantly not as good as "5th at GENESIS 6". PokemonMasterJamal3 (talk) 07:35, 13 February 2019 (EST)

I'm of the thought that these "notable players" sections shouldn't even exist until at least something like six months have passed, early results are going to be irrelevant really soon and patches + DLC means much of these players will probably not even use the character longterm. We went through this with Smash 4, and how many of the players that were flooded in those super early "notable players" sections were actually worth a damn with their claimed character some more months in? (For example, does anyone remember Nietono the Greninja main?)

Then in general, as one of the people who originally got these sections created, I always intended these sections to be for "historically significant" players of the character (i.e. for the players with the absolute best results or who otherwise was a primary innovator), as a section of just notable players is pretty redundant when we already got a category for every notable player of the character, and thus always disliked the trend of these sections getting so bloated with every player from a somewhat known region or who once placed well at a major. So under that metric, even if these sections are valid to have at this point, much more strict scrutiny should be applied and we shouldn't be putting everybody here who got a good placing at one major nor every top player who touched the character a few times. I honestly wouldn't put anyone in Wolf's yet other than arguably Zackray, who will certainly at least go down as a primary innovator if his results drop or he drops Wolf in the near future. Omega Tyrant

Actually, SugarCookie, what I said was it was a guesstimate. What I made clear was that these sections should not exist yet. I am fully in agreement with OT, because this game has been out for two months, and there is little basis to go off of to say that anyone has a strong history with any character in this game. Hbox is considered a strong Jigglypuff player in Melee because he's been playing her for years. ZeRo is considered a strong Diddy Kong/Sheik player in Smash 4 because he played them for basically the entire duration of the game's (limited) lifespan. We cannot make such judgement calls in this game. Aidan, the Lovely Rurouni 10:34, 13 February 2019 (EST)

I do agree that most of the smashers here should be removed. However, Ultimate's competitive scene is much more bigger than Smash 4's during the early metagame, apparent in that about 9 Ultimate tournaments had more attendees than the largest Smash 4 tournament within the first month of each, not to mention that there has been much more national tournaments in Ultimate than in Smash 4 in a 2-month period. I honestly don't see a problem with adding the more significant players for each character (the ones that have won a major tournament with that character, those who helped develop the metagame), especially since the metagame had developed faster than Smash 4, but if we have to I'm not against removing all other, less important, smashers. SugarCookie 420 10:57, 13 February 2019 (EST)

The size of the tournies are irrelevant, early results are still from in a very undeveloped and volatile meta well before the game's final patched form, and will be irrelevant in a short timeframe; for example who cared much about the Smash 4 results at Apex 2015 less than a year later? Additionally, two months at any point is a very narrow timeframe to be judging anyone "historically significant" off of, hell regional PRs take a longer timeframe than that to be determined. And to go back to my Nietono the Greninja main example to show how early game results are not reflective of historical significance; in early Smash 4 during the 3DS days he was the most prolific player of a perceived top tier that placed very well at the big Japanese tournaments at the time and even won one, then patch 1.0.4 (and the Wii U version) dropped and nerfed Greninja, after which he then never touched Greninja again and was a Sheik main by Apex 2015 a couple months later, while most people now probably didn't even know he was the top Greninja main at one point (even the very loose notable players sections here don't have him listed on Greninja's Smash 4 page). Omega Tyrant

I mean, that's why I believe that those who have contributed significantly to the metagame should at least be listed. Also, the example with Nietono is different in this scenario, as the 3DS competitive scene is practically non-existent and no one really uses those tournament results in notable player descriptions. Even after the nerfs to Sheik, he still had her as a co-main, right? SugarCookie 420 11:38, 13 February 2019 (EST)

"I mean, that's why I believe that those who have contributed significantly to the metagame should at least be listed."

You really can't determine this two months in on who made a lasting impact to the character's game, maybe you can argue the case for someone like Zackray, but as with the Nietono Greninja example even a player of that caliber it can be too soon to say. And if you can only list a single player for one of the most popular competitive characters, then that should be pretty indicative that it's too soon and to just hold on a bit for everything to develop more.

"as the 3DS competitive scene is practically non-existent"

Also for something else I forgot to address in the last post.

"especially since the metagame had developed faster than Smash 4"

This is also irrelevant to determining historical significance, but I'll like to point out that people said the same thing in early Smash 4, and now you look back and the gameplay in early Smash 4 tournaments is nearly unrecognizable from what it later became a couple years later, not to mention all the big early Smash 4 players that fell off hard shortly after (e.g. M2K, MVD, Jtails, Aerolink, etc.), so such a statement is even less meaningful here with that considered. Omega Tyrant

"The 3DS version held the Smash 4 scene before the Wii U version came out with several tournaments with a 100+ entrants, especially in Japan where they had the 3DS version for nearly three months before the Wii U version came out."
But what did it contribute to the metagame? Absolutely nothing. The 3DS was quickly forgotten when the Wii U came out, and a majority of top players actually stuck with their Smash 4 mains throughout its lifespan, or at least used it as a co-main.

Once again, I'm going to propose this: Just keep those that have already hugely contributed to the metagame, and remove others out of it. You made an example of Zackray, so just have him stay and remove everyone else. SugarCookie 420 12:00, 13 February 2019 (EST)
And I know this may not be too important, but I wasn't the one who added all of those names. I only added those who had contributed greatly to the meta of the character, or had high placings. In fact, I only did a few pages so far, but was still mostly hesitant on adding more. SugarCookie 420 12:03, 13 February 2019 (EST)

"But what did it contribute to the metagame? Absolutely nothing. The 3DS was quickly forgotten when the Wii U came out, and a majority of top players actually stuck with their Smash 4 mains throughout its lifespan, or at least used it as a co-main."

What people learned from the 3DS version carried over to the Wii U version, they were just separate console versions of Smash 4, and the players of 1.0.0 contributed about as much to Smash 4 as Ultimate players have thus far, as in just learning the game and getting mostly basic shit down before any patches changes things while mostly relying on their fundamentals from the prior game to get by.

"You made an example of Zackray, so just have him stay and remove everyone else."

As I said before, even if you want to argue for Zackray, what is the point of a section that we can only include one player on for one of the most popular competitive characters, just because it's too damn early to really judge this sort of stuff? What is really the rush to have these sections at this time instead of waiting a few more months at least? We shouldn't be throwing these sections onto the character articles so early just for the sake of having them. Omega Tyrant

"...getting mostly basic shit down before any patches changes things while mostly relying on their fundamentals from the prior game to get by."
Elaborate on basic. I can argue that some notable people on these Notable Players sections have figured out "basic shit" before the game got/will get patched.
"...what is the point of a section that we can only include one player on for one of the most popular competitive characters, just because it's too damn early to really judge this sort of stuff"
Why not add it beforehand and add to it later on? If you want to get rid of that section, why not get rid of all the "Ultimate mains" sections on Smasher Infoboxes? It's still to early to say whether those players truly "main" those characters, or that they will just drop said character after a month or two, thus not really counting as a real main. SugarCookie 420 21:50, 13 February 2019 (EST)

Fine, how about this. We can start adding notable players after EVO 2019. It's 7 months after Ultimate came out -- more than the 6 months minimum -- and there are even more tournaments to single out "historically" notable players. SugarCookie 420 21:57, 13 February 2019 (EST)