For the longest time, we've been the NIWA wiki with the least unique skin in all ways - even DQ Wiki, the other NIWA wiki not much changed from the default white Monobook/Vector, has a unique background image from the standard MediaWiki flower. I think we're overdue to fix this.

Here are some concept images of the new scheme I've been dabbling with: [1] [2] I chose to take the blue in the logo and 2px-thick borders used for templates, and put them together to get something simple but fresh. It's based on Monobook because the skin poll showed pretty conclusively it was the favoured skin, though a Vector-based variant would make sense once the Monobook one is close to done.

So, have a look at the concepts and give me your opinions/ideas. Toomai Glittershine

The Borders look great... but in my opinion the background shouldn't changed, and the mono-purple background just looks bad. Laikue (talk) 11:52, 18 July 2014 (EDT)

I like the borders, and I agree that is should be changed. I do like the idea of the background, maybe showcasing all of the playable characters in SSB4 (or at least the more popular ones) or the evolution of the original eight. Something like the picture I posted to the side, 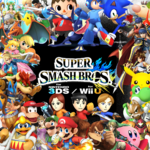 but less eye-catching, and maybe white instead of black. ...a new Nutta

Although the design may not be outstanding, it doesn't necessarily need to be outstanding. I suppose if I were to suggest a background image, we could just go with one that shows all of the series symbols, though it might need updating when Smash 4 comes out and reveals a stage from Kuru Kuru Kururin. Even as it is, though, the design is definitely an improvement on what we have now, so I'd be happy to go ahead with it. Toast

Borders look good, I support that. The background could be a bunch of light grey series symbols (either the newest versions of the original 10 symbols, all the character based symbols, or every single symbol) over a white background, which isn't too distracting but fits the Smash theme very well. ♡FirstaLasto♥ 11:59, 18 July 2014 (EDT)

Kinda mixed feelings on this one. Not necessarily averse to the borders, but they're a little too eye-catching and I'm not really convinced we need a redesign. I always preferred a more visually streamlined setup compared to a slightly busier one. Miles (talk) 12:01, 18 July 2014 (EDT)

I use Vector, but I'm mostly in agreement with Miles. I like the different borders and altered background colour, but I find most backgrounds visually distracting on Wikis. Unless the new background image is very "subtle", I'm not a big fan of adding one.

I think it'd be nice to make the wiki look a little more eye catching, but I don't think the borders are necessary. I like Toast's idea of having a background of smash symbols though. TheAtomicFire

Borders are OK, in my opinion. For a background, I suggest something common in all four games, like the vortex seen in every Final Destination background (would probably look awkward as a still, however). Or you could place a very large SSB emblem (fashioned similarly to Super Smash Bros.'s Training Mode stages) saturated just enough to be visible, but not gaudy or clashing with the rest of the background. Blue Ninjakoopa 13:05, 19 July 2014 (EDT)

I think that we should just have someone create a massive conglomeration of Smash Bros. objects inside one photo, so among the characters, there would be stage elements, bosses, items, etc. etc.. I think it would be nice to see Crates and the Fish, among other things, in the background.Qwerty da beast

Toomai said objects in the background shouldn't be the focal point, though. I think an emblem would be much more subtle. Blue Ninjakoopa 19:38, 19 July 2014 (EDT)

What about a skin more akin to the in-game menus?

I suggest we choose a style that keeps to the current design, but appears much more eye-catching to users, like say as

VinLAURiA suggested, make it more akin to the in-game menus. Something to satisfy the majority of users on this wiki. User: Crazyman14 9:54 22 July 2014 (UK)

In general, I think anything based on a specific game (e.g. character art or menu apperanace) is a no-no, because that presumes we'll keep changing it to match the most recent game, and I really don't like that presumption.

I like the idea of a Final Destination-like vortex for a background (which would be as faint as the flower thing we currently have in the default skin), but as a circular phenomenon, 1. it'd be difficult to apply to a rectangular object of unknowable size, and 2. the center of the vortex would be hidden behind the page itself, leaving only the left edge visible behind the sidebar. So what I'll probably experiment with is series symbols; yes they'll have to be updated every new game, but unlike character art etc it won't be glaringly obvious that has been or it needs to be.

For the record, the colour scheme of the above examples is this:

They're all about the same hue and saturation of blue; the lighter ones are most common, with the darker ones only being used for things like unselected tab borders. Toomai Glittershine

That doesn't sound very professional-looking, at least not what you have in mind for the background. I'd need to see a sketch-up, though...

I think a design based of the Smash Symbol would be a good idea for a background or anything like that. Preferably in a blue. - Ninelevendo (talk) 08:49, 1 August 2014 (EDT)

Why blue, anyway? Pretty much all game titles have had a predominant amount of red in them.

I picked blue because the wiki's current logo is blue, and I see no reason to either change that or to go in a different direction for the rest of the skin. Toomai Glittershine

We could definitely stand to get a scheme that looks a little more professional, rather than sticking with the years-outdated MonoBook. I say going with a style akin to a Smash menu is the way to go; I'm sure we could make something that looks generally Sakurai-esque without basing it on any specific game. His style isn't exactly hard to imitate.

The skin poll shows a conclusive preference for Monobook over Vector, so I see no reason to make something else the primary skin unless Monobook becomes an actual problem. Toomai Glittershine

Tell you the truth, I didn't even know you could switch them; I thought the wiki was just MonoBook. Still, what I was saying wasn't a matter of MonoBook versus Vector, but rather Monobook versus something completely custom.

Okay then, here are the newest concepts: [3] [4] Changes from last look:

I like it; definitely a nice change of things. However, if I may, I would like to present an idea for a Wiki background. I don't know why, but when I saw your uploaded image for the background, I instantly thought the background graphic for SSB64's menu. Perhaps maybe a Wiki background that is based off of that, but maybe the same color scheme as the background you did? I know it being game specific to SSB64 might be bad, but I believe that since all it really says is "Super Smash Bros." and "Hal" that it'd be generic enough as the background. Just my thoughts as a suggestion. Unknown the Hedgehog 11:50, 7 September 2014 (EDT)

Interesting idea. I kind of want to avoid text in the background though, because it tends to be naturally more obtrusive in my experience. Toomai Glittershine

I know what you mean, but most of the text seem to me that they are altered enough that they look more like shapes than text, with the exception of a few. Unknown the Hedgehog 12:12, 7 September 2014 (EDT)

I like the background as is. It's a really nice change to the wiki, plus the bullet points really distinguish us from any other NIWA wiki. Rtzxy