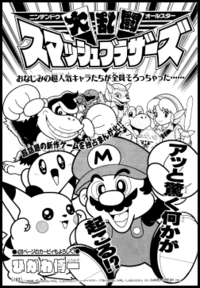 The cover of the manga.

The Nintendo All-Stars Free-For-All! Smash Brothers (ニンテンドウオールスター大乱闘スマッシュブラザーズ) is a one-shot manga chapter loosely based on Super Smash Bros. Originally released on January 15, 1999 by CoroCoro Comics as part of the February 1999 issue and both written and illustrated by mangaka Hirokazu Hikawa, the manga has never been officially translated or rereleased since.

The story takes place in the realm of the Toy Kingdom. The cast of the game exists in the realm as dolls, and when the clock strikes a certain time, these dolls come to life, similar to their appearance in the opening cinematic.

Mario is the first to awaken, followed by Pikachu and Kirby. Donkey Kong opens his eyes, but starts clapping like a cymbal-banging monkey toy. Mario offers Donkey Kong some bananas to snap him out of it. Donkey Kong responds by closing his eyes and opening his mouth wide, waiting to be fed. However, Kirby inhales all the bananas before Donkey Kong can have any. Upset by his lack of snacks, Donkey Kong starts to yell and chuck barrels around while shouting for his bananas. He then looks over at Pikachu, who is prominently yellow, and mistakes it for a bunch of bananas. Donkey Kong starts chasing Pikachu around, which causes Kirby to step in by painting himself to look like a Poké Ball. Mario, unsure about what will happen next, throws Kirby at Donkey Kong. After being thrown, Kirby spits out Yoshi, who starts throwing eggs to stop all the commotion, but Kirby steps in and decides to inhale the eggs as well. Everyone then yells at Kirby for being a glutton. Link then appears and asks everyone if they are fighting again, but Mario, Donkey Kong, and Kirby ignore him and continue bickering. Link calms everyone down by playing his ocarina, and when everyone settles down they are not aware of why they were fighting in the first place. Kirby then walks off, grabs a harmonica, and decides to play alongside Link. Everyone starts bickering again as Link wonders what else he can do to get them to make up.

The next day, Donkey Kong wakes up with a note stuck in his mouth, which Mario, Pikachu, and Kirby gather around to read. The note, signed by "Phantom X", says that Yoshi has been taken and that they must go to Hyrule Castle to rescue him. The four of them agree to help Yoshi together. Once they enter Hyrule Castle, a monitor broadcasts a message from Phantom X, asking them to come if they want to rescue Yoshi. The front door closes behind them, trapping the heroes inside. Pikachu spots a number of unlit torches lining the hallway, so Mario uses his Fireballs and Kirby uses his Fire Copy Ability to light them. Once all the torches are lit, the door to the next room opens, and Mario and Kirby congratulate each other. Donkey Kong runs off ahead to destroy the wall instead of using the door, and the floor underneath Donkey Kong opens up to reveal a bed of spikes. Donkey Kong manages to grab hold of the edge of the pit at the last minute, saving himself from certain death. Mario and Pikachu attempt to pull him back onto the floor but are not strong enough; Kirby floats his way under Donkey Kong and uses his Needle Copy Ability to prick Donkey Kong. The shock of being stabbed causes Donkey Kong to jump up in pain, allowing him to clear the pit and bring himself back to safety. Donkey Kong reluctantly thanks Kirby for helping him out.

Two of Phantom X's henchmen arrive before them - a fox man and a woman in a space helmet, both wearing cloaks and masks - and they refuse to let the heroes through unless they defeat them in battle, which they immediately agree to. Mario orders Pikachu to use Agility to dodge the laser gun attacks being fired off by the fox man while Kirby decides to use his own variation. Phantom X's fox henchmen aims his laser gun at the slow-moving Kirby and fires. Donkey Kong steps in at the last second and absorbs the blast with his bare hands. Kirby asks Donkey Kong if he is OK but the latter assures him that he is fine, boasting that the skin on his hands is "hard as steel". Kirby, now wearing Ash Ketchum's cap, orders Pikachu to use Tackle, which hits the fox man head on. Kirby uses his Wheel Copy Ability on the woman in the space helmet, which quickly knocks her out. With the henchmen defeated, the way is cleared for everyone to proceed into the final room, where Phantom X is waiting.

Mario rushes into battle and uses his Super Jump Punch, but Phantom X is able to dodge it and counter with a Spin Attack. The attack does no real damage, but it does manage to shave off Mario's mustache; Kirby runs over with a marker to draw a new one on. Eventually the four realize that they must work together to defeat him. Donkey Kong picks up Mario in one hand and Pikachu in the other while Kirby stands in front of the three. They then launch into their ultimate combination attack, dubbed "Combination Super- Jump Tornado-Screw Electric-Attack!". The super attack hits Phantom X head on, blasting him off into the air.

Phantom X falls back to the battlefield, picks himself back up, and congratulates everyone on their teamwork to the heroes' confusion. Phantom X then reveals himself to have been Link the whole time. Samus and Fox also reveal themselves as Phantom X's henchmen as Yoshi steps out of hiding, having never been in any real danger. Link and the others reveal everything to have been a plot to get them to stop bickering and work together for a change; Mario and the others are impressed with the plan.

Link then explains that, since they defeated "Phantom X", they have a chance to open a treasure box and claim whatever is inside. The box is opened to reveal a huge amount of fruit: Donkey Kong starts grabbing the bananas, Yoshi goes for the watermelons, Mario wonders where the mushrooms are, and Kirby inhales everything else as Pikachu watches the whole thing with a distressed look on its face. This frantic dash to get fruit causes these briefly made-up friends to fight once again.