I've heard in Brawl, he makes an appearence as an item. Could someone double-check for me?--Aipom--

Kudos to whoever gave that tip about when Sandbags are the only items, they only drop CDs and Stickers. Esoter 06:13, 30 March 2008 (UTC)

It's not. The sandbag is androgynous because Japanese has no neuter noun class. However, every noun has to have some noun class, so it's ascribed the default masculine noun class. That doesn't mean that you can take its pants off and go 'Yup, that one's definitely a male,' otherwise. It's not interesting. Such a proposition in English would be ridiculous because we have a neuter noun class for things that are, wait for it, gender neutral. Fail. Semicolon (talk) 22:57, 17 February 2009 (UTC)

...Except Europe's trophy description says "he", and Europe's main non-English language isn't as hard to translate as Japan's in text, as it (possibly) uses the English alphabet (including accents which just add something like a swirly line on top of a letter).

Does anyone know how heavy the sandbag is when compared to the playable characters? Omega Tyrant

In this picture here 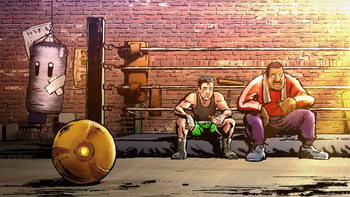 We have no idea if it will appear in SSB4 yet. Likely it will in my opinion. Dots (talk)

Is it me, or does the Sandbag actually flash after taking a ton of damage. I know it's not the normal transparent-like flash for when an item is about to disappear as it was flashing black. I was playing Super Smash Bros. for Wii U's 8-Player Smash on Temple with some amiibo and if I recall, a Sandbag was on-stage and my Mario amiibo was tormenting it with a Home-Run Bat. I then noticed it tumbling off-stage as it was flashing black. Since when did this occur, if at all, in the previous games? I'll look into it and maybe upload a screenshot of it.