Why in the world is such a thing even remotely necessary? MegaTron1XD

That's literally going to be a chart that only consists of notable usages of the the pivot grab, rather than a chart for each character. In addition, a comparison about who has a more effective pivot grab only boils down to characters who rely on their incredible throws that could benefit from having the grab, making such a listing unnecessary. MegaTron1XD

You seem to think that pivot grabbing is as important to the game as glide tossing. People have gone to extensive lengths to explore the properties of glide tossing because of how useful it is. Pivot grab, on the other hand, isn't a massive metagame changer while very few distances exist between each character's pivot grab. You don't need to document the distances when they're all similar and no where near the same level of importance as glide tossing. MegaTron1XD

I didn't think or say that the Pivot Grab just as important as the Glide Toss. All I said was that the article should say who benefit from using the Pivot Grab. Only reason why I'm saying this because the Pivot Grab is better for characters like Ness and Olimar. And the fact that it can be used to mixup a player's mindgaming strategy. To have something that explains who benefits from the move is not necessary, it was just a suggestion. Smashdude10 (talk) 20:53, 12 February 2014 (EST)

Information is information, there should be a chart with the grabbing reach of each pivot grab, no reason to not have it. Omega Tyrant

There actually is a naming conflict between the Melee Community and the Brawl Community about what the term Pivot Grab means. In Melee, a Pivot Grab means turning around during your dash dance and using a jump cancel grab (or grabbing during the 1 frame turnaround). Here's me using it to dash dance away from a shield grab and grabbing right after I turnaround. And here's Amsah doing the same thing, except here it's explicitly referred to as a pivot grab In Brawl a Pivot grab refers to a grab done during a running turnaround. Since neither of these techniques were in the same game before, it was easy to differentiate between via context. However in Project M both pivots grabs having been implemented and I have had people come to me confused when I say "learn how to pivot grab" and then do Brawl Pivot grab, when I actually meant the Melee pivot grab. The question here is should separate articles be made or should both techniques be explained on the same page?--BrianDon't try me!

I think they should be on the same page, like how the crouch cancelling page is laid out. Toomai Glittershine

Strictly speaking, this is not true. If the control stick is moved out of the smash input zone in the direction the turn was triggered, the pivoting character will stay in his turn animation and can start his grab on frame 1, 2, 3 or at any arbitrary frame of the turn animation. It’s not at all easy to do this as the stick needs to remain in the smash input zone for exactly one frame. Here is an input-output diagram of the control stick ranges that trigger a smash turn / smash input: 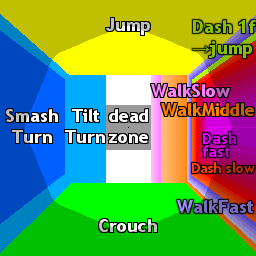