This is pretty much the full render for Duck Hunt. I would upload it myself, but I don't have an account. Only SSB4 newcomer with a Melee trophy[edit]

Hey, there's a picture of Duck Hunt on the Smash Bros. Miiverse fansite, and I wanted to know if it's eligible for being Duck Hunt's image on the articles.

I don't see why not. Rtzxy

Never mind. Someone else found or made a better one with no horribly pixelated and blurry border. --NintendoNinjaCarson (talk) 09:09, 18 September 2014 (EDT)

I think we should decide whether to consistently call Duck Hunt either a duo or a trio. I personally include the unseen gunman, so i think that The character is a trio. What do you all think? I think either way consistency is key Gpev96 (SHAZAM!) (talk) 10:33, 30 September 2014 (EDT)

Duck Hunt Duo is the the official English name[edit]

So can someone rename the page? Or will we keep it as "Duck Hunt"? —Preceding unsigned comment added by MunchyMunch (talk • contribs) 14:59, 2014 September 30 (EDT)

First, reddit is not an official source, so no move. Second, sign your comments with four tildes (~~~~). Rtzxy

This image is linked there, and I would believe it since some European stores are bringing out copies of Smash 3DS already. Scr7

Alright, but who's to say that the image is fake? I'm not saying that it is fake, but photo fakes are easy to make. I say wait until we can actually get the game, which is like 4 days anyways. We can wait. Rtzxy

Does anyone else find it odd though, that people keep refering to them as a duo, and not a trio? Do you guys consider the gunman as the third character? Gpev96 (SHAZAM!) (talk)

All the text dumps we have so far don't agree with this name, and I'm hearing a few with the North American review copy saying "nope". Toomai Glittershine

I don't see why they would fake this, it seems like a stupid thing to fake. But I don't think we should rename it if there's no proof but a picture. That's what SW:NEWGAME says, right? ...a new Nutta

It is a stupid thing to fake, but that really says nothing. It could still be fake; anyone could fake anything, no matter how stupid it may seem. We should in fact wait until October 3, which is only 4 days away, until we move the page (or not), but until then, we keep it as is. Rtzxy

Because we need video evidence before we can add it as fact, as stated here. Plus, it's only four days; we can wait and you can survive. Rtzxy

From Jed05's stream, I can clearly see that Duck Hunt Duo is the official name. Awesomelink234

So it might be different in the NA version? I thought so, so until we can get the game ourselves on October 3, we don't do anything with this page and keep it as is. Rtzxy

But the roster design seems different... even on the default roster, Shulk is placed with the third party characters. Why would he move up a row? ...a new Nutta

If memory serves, when Luigi was unlocked in Melee, he bumps Pikachu down to a ?-space. Plus, Brawl's roster totally moved around when you unlocked characters. It's not like this is new to us. Aidan the Gamer 21:52, 30 September 2014 (EDT)

Yes, that's all true, but Shulk starts out on the bottom. This would imply he starts on the bottom, moves up a row, but then moves back down. And he's not the only one. Ness is also moved up a row. Not to mention ROB is the only character absent. It seems odd he would be the last one unlocked. ...a new Nutta

You also got to remember this is the EU version; the placement might be different in the NA version of the game. Rtzxy

Does seem like an odd regional difference. I don't know. It's a pretty good fake, if it is one, as well as a pretty dumb fake, but... something seems off. ...a new Nutta

It could be fake, but we don't know. Rtzxy

I think you're just overthinking it, honestly. Don't get me wrong, I have doubts for this thing too (I honestly think "Duck Hunt Duo" is a terrible name), but if someone took a picture of Brawl's roster back in 2008, and it didn't have every character, then some people might've been skeptical about it. Hell, people who leaked 100% accurate information about Brawl were treated as trolls on the Internet. I dunno. I say we wait. Aidan the Gamer 22:06, 30 September 2014 (EDT)

Uh...take a closer look at the image. When ROB is unlocked, he takes Ness's space, who then goes down to the next row, and in turn, Shulk is bumped down to the final row beside the third parties. There is no difference, this is exactly how it is in every other version of the game. --Skittles (talk)

Like I said in the beginning, even if this picture is true, we wait until we move. Rtzxy

Again, Shulk starts out on the bottom row. No other characters join that row (except the Mii Fighters), so it seems odd that he would move. ...a new Nutta

"This is exactly how it is in every other version of the game." If you've seen the characters get unlocked, you'll know that the character select screen eventually becomes a full rectangle. However, once more characters become unlocked, it pushes the third parties, Miis, and random to the bottom. Once the roster is full, Shulk is moved to the bottom again. It's just how the screen works. --Skittles (talk)

The game will be released in 4 days. When we do get the game, we can find out if this image is fake or not, so as of now, we keep it as is. It does seem odd that Shulk is in that location, and that could prove the image is fake, but the image could also be real. So, wait a few days, get the game yourself, and see if the image is real or not. Rtzxy

I agree with Rtzxy, we can just wait til it comes out. Perhaps it could be an interesting bit of trivia to add that he has a different European name, if that is the case. Gpev96 (SHAZAM!) (talk) 09:11, 1 October 2014 (EDT)

Well things are getting interesting. Apparently Duck Hunt Duo is the EUROPEAN name, and Duck Hunt is the Japanese and American name. 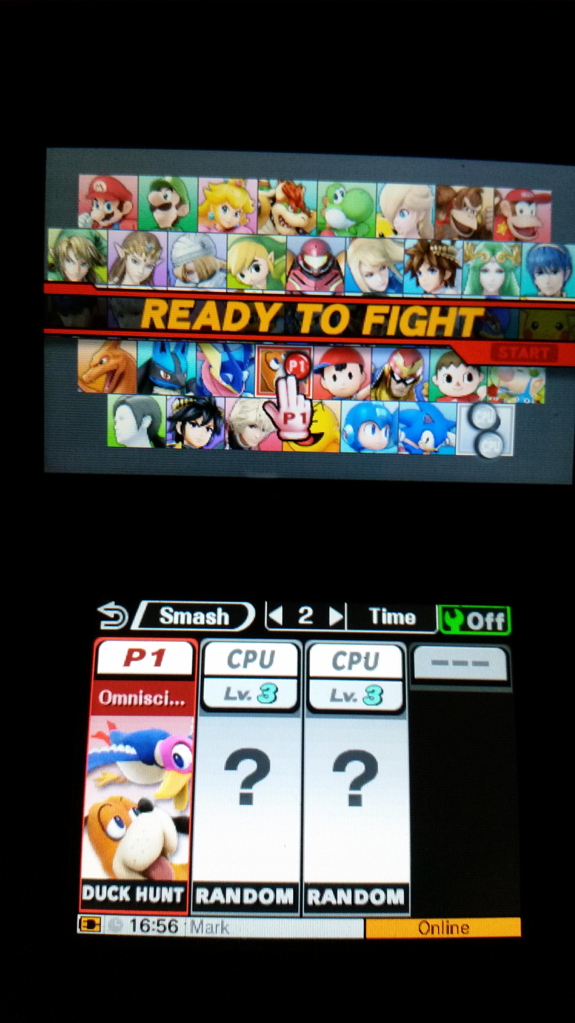 This was about what I expected once I saw that the "Duck Hunt Duo" name had been in a European copy of the game. Still, I'll wait a few days on the move protection. We should add appropriate redirects for the European name, though. Miles (talk) 13:30, 1 October 2014 (EDT)

Right, so I just unlocked the character, and the game says "Duck Hunt Duo". I guess that means the name is different in European versions of the game. Scr7

Remember though that Duck Hunt doesn't just represent the game of the same name; it also includes clear references to two other light gun games, Hogan's Alley and Wild Gunman, both of which do involve armed criminals. It's somewhat understandable to conflate them, and it's not quite clear what role if any the fourth-wall user of the light gun is supposed to have. Miles (talk) 13:36, 2 October 2014 (EDT)

The first sentence says that it's "the gunman from the game Duck Hunt". PikaSamus (talk)

The article says Duck Hunt (implying the whole group) is fully quadrupedal; every member except the dog is bipedal (cf. the Pokémon Trainer and his team minus Ivysaur). --GastonRabbit (talk) 18:52, 2 October 2014 (EDT)

There was a picture of trophy for a Tin Can, A.K.A. Duck Hunt's standard special move "Trick Shot", and this really doesn't qualify as a leak, it's like saying Mewtwo is leaked in Melee's opening because his Shadow Ball is there. Laikue (talk | contribs) 11:18, 16 November 2014 (EST)