That the fire from real life that even looks like this: File:SSBDarkFlames.png That dark purple flames is one of my favorite fire in the world. I can tell that can burn up anything just like normal fire i guess.--Brandondorf

Look, even if English isn't your first language, you shouldn't be posting this kind of stuff on talk pages. They're supposed to be used for discussion of the article, not the article's subject. Toomai Glittershine

Darkness is fire and can thaw frozen objects too.--Brandondorf

Actually test your theory before claming that they are true. Darkness does not dethaw opponents if you use Ganondorf against any frozen character. MegaTron1XD

I know but thats what it looks like. You have to look on the effects on the textures and identify which is which on one of the pac, brres or pcs files. And i tested it before on those games and that darkness is fire and did thaw the ice objects.--Brandondorf

No one cares what it looks like, we care what it does, and it's trivially seen that darkness attacks in Smash Bros. do not thaw frozen targets. Toomai Glittershine

Sheesh, look at this 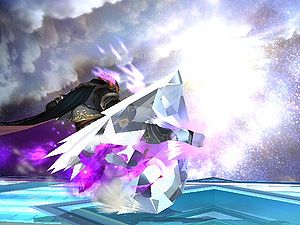 That darkness on that pic has heat and can melt ice.--Brandondorf

If it melted the ice, the character would not still be frozen after being hit by Wizard's Foot. Omega Tyrant

SW:TALK. Talk pages are not to be used to share your opinion on the subject of the article. Omega Tyrant

This page talks about moves with the darkness effect, not subspace tools. ShupaRoeh

Did you read the previous statement? This page is about attacks with the Darkness effect. Shadow Bugs and Dark Cannons are cutscene-only, non-gameplay elements. Toomai Glittershine

How would such speculatory guesswork be any more appropriate there? Toomai Glittershine

(Reset indent) No. Such speculation can't be added. ShupaRoeh