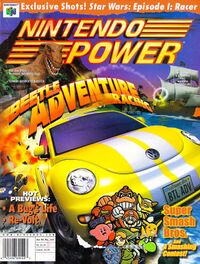 Cover of issue 119, the first issue that covers anything smash related

Nintendo Power is an official print and online publication created and distributed by Nintendo. It started in August, 1988 as a subscription based magazine by an in-house journalism department at Nintendo of America. The magazine was a spiritual successor to the Nintendo Fun Club, which lasted for seven issues and was canceled in favor of its followup. Nintendo Power specifically provided new and upcoming information and content relating to the company, their games, reviews, and game strategies. Future US, the American branch of British publisher Future, took over production in December, 2007 with Nintendo still overseeing in a producing role. The Magazine was officially discontinued on December 2012 after 285 issues. The brand was revived on December 20, 2017 with the Nintendo Power Podcast, with new installments being made to this day. The podcast is run by many of the same staff that worked on the original magazine, and serves a similar function, albeit in a less formal fashion.

Several issues featured content from from the Super Smash Bros. series, including development coverage and guides on features and how to play. Super Smash Bros. Melee even received a full Player's Guide upon release.

Nintendo Power first covered the Smash series in issue 119, first released in April 1999. A blurb on the cover explains that content is in the issue, and the table of contents says the Super Smash Bros. coverage starts on page 24. From said page until page 32, the magazine gives an abridged rundown of the game, including most game modes, controls, items, and every character's basic moveset.

Melee is featured as the main topic on the cover, marking the first time a Smash game is on a Nintendo Power cover. The table of contents on page 8 is themed around Melee. Page 30 through 38 is an abridged guide to the game, including brief summaries of various game elements, including modes, base roster fighters, techniques, items, classic mode, adventure mode and adventure mode. The issue does not go into great detail on any of these topics and keeps unlockable portions of the game a secret.

The game is reviewed on Page 166. The rating system has changed since the review of SSB to have the same categories that are now rated out of 5 stars. Every category received 5 stars.

Melee received a dedicated Player's Guide that released around the same time as the launch in North America. The guide takes the same general topics from issue 151 and goes much farther in depth with them.

Brawl is featured on the cover, marking the second and final time a Smash game appears on the cover of the magazine. Starting on page 46, 10 of the most exciting features in the game are listed. The listed features are the following: an all-star cast, four kinds of control, the craziest items yet, the best soundtrack ever, ultimate fan service, amazing arena, cool cameos, final smashes, adventure mode, and wi-fi battles, with a special "Snake Surprise" section that talks about Snake.

Page 30 explains that while the game had been delayed until February, 2008, there is still more news about the game incoming. The article then goes on to talk about Sonic as the standout character in the roster.

Page 28 talks about various ways to customize the gameplay experience. These include assist trophies, items, fun new stages, and the new stage builder feature. Custom stages can be saved to an SD card or uploaded online where Nintendo may temporarily promote said custom stage. The Wii remote can also be used in some new ways like the Smash Shake method of shaking the controller to activate a smash attack, as well as downloading a name to a remote so control preferences can be automatically set on another copy of the game.

Page 23 advertises the Smash Bros. DOJO!! and its frequent updates like the new rotation mode and Poké Balls. Returning features include events, several stages from Melee, and sound test being available from the start.

The game receives a special 2 page review on page 82. The game received a score of 10, a perfect score, and was declared a rich, content-packed experience exceeding the previous games in the series, with particular praise going to its grandiose scale and impressive level of detail, as if it is more of an event than a game.

Starting on page 66, the editorial staff display 6 of their custom stages made in stage builder and explained how to make them with tips to use stage builder to the fullest.

Starting on page page 60, Masahiro Sakurai is interviewed on the subject of Brawl and the Smash series. He goes in depth about how the series started, his thought process on major decisions, and some struggles during development. He was also questioned on several rumors and directly addressed them, such as Ridley never being considered as a playable character, and the wavedash was a known physics exploit that was left in Melee, but was removed in Brawl to lessen the now massive skill gap within the playerbase.

The Smash Files were a series of articles in Nintendo Power that briefly covered all of the confirmed characters in Super Smash Bros. Brawl at the time one by one in most issues from #206 to #221.

Due to being officially announced after the release of the final issue, Smash 4 was not featured by Nintendo Power in print.

Episode 8 of the Nintendo Power Podcast talks extensively about Ultimate. At the 42:29 mark, the members talk about the announcement from the Nintendo Direct that occurred days before. They specifically talked about their reactions to the newly announced characters and gameplay features.

Episode 12 was the Fan-Favorite Games of 2018 episode, where games won awards for different categories. Ultimate won best multiplayer game. All nominees for most hype moment were related to Ultimate, with the winner being with the World of Light trailer winning. Ultimate won for game of the year, best looking game, and best soundtrack, while King K. Rool won character of the year.

Episode 17 talks about the E3 reveals of both Hero and Banjo & Kazooie.

Episode 22 talks extensively about Terry's inclusion as a DLC character.