Forum:Placing major alternate costumes in tabs inside of the infobox

From SmashWiki, the Super Smash Bros. wiki
Jump to navigationJump to search
Forums: Index → Proposals → Placing major alternate costumes in tabs inside of the infobox

I’m talking about Ike, Wario, Cloud, Bayonetta, Isabelle, Olimar/Alph (only on the fighter pages though), and the genderswaps specifically. For example, instead of Cloud’s Advent Children being lost inside of the gallery section, it would be inside of the infobox, directly under his default costume, under a new image2 template placed directly under the default. The same applies to all other characters listed. Now, what would define a “major” alternate costume, you might ask? It completely depends on how many costumes that costume has. For example, Wario with Overalls qualifies as a major Alternate costume because it makes up half of his alts. However, Meta Ridley does not, as he only makes up two out of the eight. Alph is a major Alternate costume, but the Koopalings are not because they don’t have costumes of their own. The only stumbling block is that Wireframe Mac might fully qualify as a major alternate costume in Smash 4, but not in Ultimate. However, as Overalls Wario fully qualifies as a major alternate costume, the same should be applied to SSB4 Wireframe Mac. Lou Cena (talk) 02:30, 3 February 2019 (EST)

Using Corrin as an example here. However, Female Corrin would go right underneath Male Corrin instead of being on his right, and the symbol shouldn’t be displaced (I have no idea why it is): 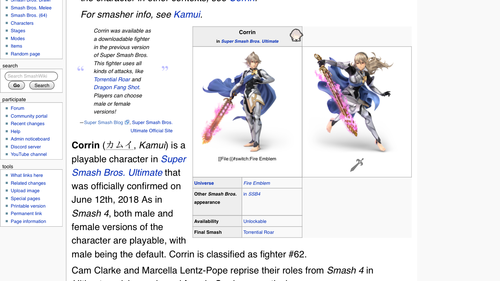 Is there a way to make it so that a button doesn’t have to be pressed to change from one alt to the other? Like have female Corrin directly below Male Corrin, with the symbol directly underneath Female Corrin. Lou Cena (talk) 19:34, 5 February 2019 (EST)

The big problem, however, is to define what "major" means, as I don't believe your definition really works that well. For example, I believe the Koopalings are "major" changes because they are alternate costumes, something that many characters do not have. It'll be somewhat unnecessary to make changes like that, at least from what I believe. SugarCookie420 (talk) 20:05, 3 February 2019 (EST)

Like I said, the Koopalings are only 1 put of 8 costumes for each one. To keep the clutter out, only costumes that take up half of the slots are considered “major”. That means Dark links, Koopalings, SSBU Wireframe Mac, Felt Yoshi, Meta Ridley, and Mario’s two outfits don’t count. Lou Cena (talk) 21:28, 3 February 2019 (EST)

This seems like a cool idea, but I imagine it'd get really cluttered for some characters with multiple notable alts. The Koopalings are the most obvious "problem" of course, but what about Villager and Inkling? Each of their alts have different physical features/appearances. Do we consider each one unique? What about male and female Pikachu? There are a lot of things to consider here before making this change, but if we can come to an agreement on what's considered notable and what's not, then I'm all for adding this new feature. Pokebub (talk) 20:58, 3 February 2019 (EST)

I actually specificied what qualified as a major alternate costume. It’s whatever takes up half of a characters’ costumes. For example, Female Corrin/Robin/Trainers/Villager/Inkling all qualify as “major” because there are 4 male and 4 female for each kind. However, because only there are only 2 female Pikachu costumes, they do not qualify. Link (Ultimate only), Ike (Ultimate only), Cloud, Bayonetta, Isabelle (because of the Jacket), and maybe Plant (because of the pipe) all qualify as wellWireframe Mac qualifies in SSB4 because there are 8 out of 16, but not Ultimate because there are only 2 put of 8. Wario’s Overalls costume should qualify for all games (though Brawl might be a bit wonky because we don’t have a higher quality version). Lou Cena (talk) 21:28, 3 February 2019 (EST)

If there is indeed a way for users to do a tab-like "click to swap what's displayed", then sure. But I don't like the idea of an infobox having two major images in it, it just seems cluttered. (And having one smaller than the other would just look weird.) Toomai Glittershine

I successfully managed to get the two-image thing for the general character box. Again, using Corrin as an example, I’d like to show this to you to see if you still think it’s cluttered. If so, I’ll look into how to get the tabs thing working. Lou Cena (talk) 00:54, 6 February 2019 (EST) 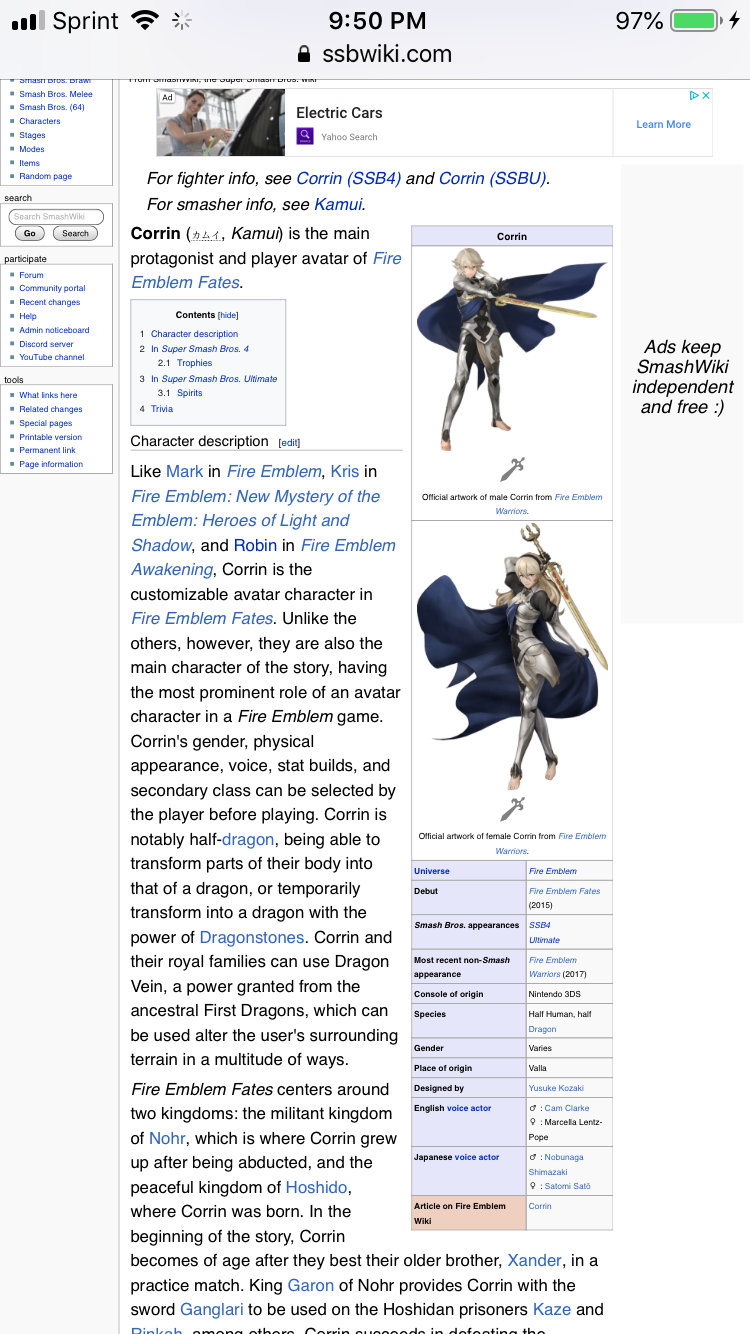 Here's the Character Infobox on FE Wiki. They have a tab for each iteration of a character. Here's an example of how it works. Maybe we can do something like this? SugarCookie420 (talk) 20:21, 5 February 2019 (EST)

I definitely feel like major costume changes should be somewhere in the page before the Galler. That being said, I'd be more inclined to do something like Bulbapedia does on Castform's page. I don't think this looks too odd, it makes it obvious which costume is the default, and it should be easier to use for mobile users. AmoongussForLife

Most of us have agreed that splitting them up in tabs would work better. Thanks for the suggestion though. Lou Cena (talk) 20:56, 8 February 2019 (EST)

Is there any way for us to have a consensus on this? It seems like most of us agree with putting the costumes inside of tabs, but I just want to make sure. I don’t want this proposal to go to waste like the other ones. Lou Cena (talk) 11:50, 9 February 2019 (EST)

So it seems like the consensus is that using multiple images in infoboxes is fine as long as they’re in tabs. Does anybody know how to put them into tabs? I’m sorry if I’m sounding demanding. I know SugarCookie said that I could go ahead, but I actually don’t know how to put multiple tabs into an image infobox. I know how to add a second image template, but not the tabs. Lou Cena (talk) 02:14, 10 February 2019 (EST) Urrently I’m working on this in the sandbox (https://www.ssbwiki.com/SmashWiki:Sandbox). I’ll put up some sections on support, neutral, or oppose. Lou Cena (talk) 15:12, 11 February 2019 (EST)

I support this idea, but I want to bring up: would it be worth considering costumes that have Fighter Spirits as "major" costumes? The selection is a bit odd—it doesn't include Hero of the Wild Link, but does include Crafted World Yoshi, Pikachu Libre, and Mario's alts—but these (and other material such as press kits) indicate that they're meant to be considered major costumes. I think it's worth looking into. DryKirby64 (talk) 20:17, 12 February 2019 (EST)

As I stated before, I based this primarily on if the alts had alts themselves. For example, Pikahu Libre is only one costume, while Winter Isabelle has three of her own alts. Lou Cena (talk) 20:59, 12 February 2019 (EST)

Lou Cena (talk · contribs · logs · block user · block log · Cena WHOIS): The one who made the proposal in the first place. Is currently attempting to test a new version of said template change in the Sandbox. Has no idea how to actually create tabs. Lou Cena (talk) 18:20, 11 February 2019 (EST)

SeanWheeler (talk · contribs · logs · block user · block log · WHOIS): I think just the default costume is good enough. The rest can be in the alternate costume gallery. And personally, I prefer default canonical characters over the alternate colors. Plus it can be confusing which costume would be notable. SeanWheeler (talk) 20:38, 14 February 2019 (EST)

Toomai (talk · contribs · logs · block user · block log · WHOIS): disagrees with having the two images in the infobox without tabs. Neutral about the tabs. REQUESTING SIGNATURE AND/OR CLARIFICATION

Miles of SmashWiki (talk · contribs · logs · block user · block log · of SmashWiki WHOIS): disagrees with having two images in the infobox without tabs. Stance on tabs is unknown, as said proposition was suggested after he had given his stance on the issue. See Template talk:Infobox Character general. REQUESTING SIGNATURE AND/OR CLARIFICATION

AmoongussForLife (talk · contribs · logs · block user · block log · WHOIS): agrees with the notion that major alternate costumes should be in the imagebox. Disagrees with the use of tabs. Could possibly be considered a supporter. REQUESTING SIGNATURE AND/OR CLARIFICATION