I have a glitch that ISN'T posted on the main page. In Brawl, use Link in any mode. when the Metroid Assist trophy appears from the other fighter, make sure is latches on Link. Spam B-up and Link flies! Cause the Metroid is canceling Link's B-up while your are pressing B-up. So he goes higher and higher and higher..... until the Metroid dissapears. It's quite funny.--MKMaster93 (talk) 21:46, May 19, 2010 (UTC)

Should we include them? It will make navigation easier.

No video here. Make one to help. Go to the WarioWare stage as Kirby. Use Kirby's final smash in a minigame (Don't know the exact terms but I got it in the minigame where you have to break the trophy and it ended a few frames before the stage transition) and the stage will turn invisible, and the fall through layers will no longer work (It came back when I failed a minigame but I don't know about you). —Preceding unsigned comment added by Arkyance (talk • contribs) 00:29, October 20, 2009 (UTC)

That's not a glitch. Sometimes the WarioWare stage will skip right to another minigame without completely going back to the main part. (Don't forget to sign your talk page comments with ~~~~.) Toomai Glittershine 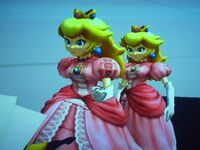 I found a strange glitch while playing as Peach on PictoChat. When the CPU appeared, another Peach that was the exact same as me popped up. I can try to find the picture on my SSBB photos. Riched (talk) 17:48, December 18, 2009 (UTC)

So let me get this straight...You were Peach, you had two CPUs as Random, and when the match started, you noticed that one of the CPUs was a Peach with the same colour scheme? Hmm...I can think of two possibilities here.
Either way, the chances of re-creating this glitch are cosmologically infinitessimal. Toomai Glittershine

This is entirely possible, it would just take a very long time, as Toomai said. The random generator for the game has to limit(other than to pick unlocked characters etc.), so it completely ignored the fact that Peach's pink costume was already taken, and chose it anyways. It's not a glitch, it's just an exploit of the random generator.Smoreking(T) (c) 14:59, April 11, 2010 (UTC)

Hello I was playing around on my emulator version of super smash bros. and I turned on charcter modifer on 4-player mode (Ihad all charcter modifers to master hand) and then when I punched someone there % bar turned to Hp. I Think this will help Eggmanfan Note: They won't fall over and die like in melee and brawl they just stand there

I was playing a training match on the Animal Crossing stage and got an assist trophy on the moving ledge thing. Well, Shadow the Hedgehog popped out and stayed on the ledge. The "glitch" part is, when he started to slow down time, he stayed in the exact spot even when the ledge was moving. I did it twice on that training match, and later did it again on a stock match. Assist trophys were the only items. Would this be considered a glitch? —Preceding unsigned comment added by 71.7.149.0 (talk • contribs) 17:36, August 27, 2010 (UTC)

I don't think that is a glitch, it is probably how Shadow functions. Shadow stays in the same place in the air regardless of his surroundings. As such, if he is summoned in Rainbow Cruise, he'll remain in the same place while the stage moves. If he is summoned on a block in Yoshi Island Melee, he'll remain in the same place even if the block is hit. I may be wrong here, but I find it more likely that this is correct than a glitch that occurs only on Smashville. Also, remember to sign your comments by inputting four tildes ~~~~ at the end of your posts. Omega Tyrant

I read it and it isn't that notable as it is just one of the many Bridge of Eldin final smash glitches. You can make a mention of it on the Bridge of Eldin article, but this glitch isn't notable enough for its own page. Also, you should have posted that information here instead of on your talk page. Omega Tyrant

Heeeeeeeeeeeeeeeeey, old buddy old pal Omega Tyrant! Okay, so, I totally agree. It's not notable enough for it's own page, I shoulda posted the description here, bla bla bla... but still, any body who's interested, go to my talk page... It's still a full-fledged glitch though, right? SonicRulz13 (Talk|Contribs) File:User SonicRulz13 sig.png|19px 20:22, September 8, 2010 (UTC)

Actually, while thinking of it, I don't think it's a glitch. With Negative Zone, when Luigi can move, the zone stays where it is instead of staying with Luigi. As such, the bridge reforming just stops the dancing animation sooner and since the zone doesn't follow Luigi, it stays where it was spawned. Omega Tyrant

There's a glitch involving the Pikmin Chain that is mentioned in its article. Omega Tyrant

Many glitches in this category seem trivial and unnecessary. I say we have a boundary for what is acceptable as a glitch article and what not. Obviously glitches that have recieved quite a lot of attention and allow the player to do extraordinary things such as this, this, and this deserve articles, but I don't think that things like these deserve an article. Mr. Anon (talk) 00:30, 25 November 2010 (EST)

In Super Smash Bros. Melee, You can make Mario go super high. First chose Mewtwo and Mario make the characters close (but not too close) at the same time, have Mewtwo use Down + b and Mario use Up + b, if done corectly, Mario should be seen in a hoop at the top of the screen.Z (talk) 20:54, 18 February 2011 (EST)

I think I may have found a new glitch. Okay step one: go to training mode and chose stage and character. Step two: put many soccer balls in the same place so it appears to be only one soccer ball. Step three: hit the soccer balls and you should see what I mean. Brawls of fury (talk) 13:45, 14 October 2012 (EDT)

That's not a glitch, that's just the soccer balls hitting into each other and doing what they're programmed to do. Omega Tyrant

So long as exceptionally well known ones like the Black hole glitch or Master Hand glitch retain their own pages, I'd be fine with this as a way of condensing minor ones into a more useful format. Miles (talk) 12:23, 29 August 2015 (EDT)