I'm a little late on this, but I'll inform you now seeing how you weren't given a formal warning; this wiki does not care for offwiki matters. Dragging offwiki drama here is not acceptable, especially making an account for the sole purpose of such. Omega Tyrant

Sorry about that, but the issue is cleared up. It turns out I'll only be banned for 2 weeks, and I'll just be hanging out here, and on DK wiki for the time being. But I didn't just create this account to spread that news, and I'll try to be a productive member here. Post ya' later! SmashBall104 (talk) 10:54, 5 November 2012 (EST)

Need help? The community portal has an outline of the site, and pages to help you learn how to edit.

Just tellin you now, you're violating a lot of SW:TALK. We ain't be a social site bro. The outlines for talk page usage on there are pretty much the same for most Wikis. Also, don't try to pretend that you're a good contributor by stealing information from Mario Wiki for DK Wiki or SSB Wiki use. A lot of the stuff they have on there is wrong, common sense, or general, which is why NIWA has SSB Wiki and DK Wiki. MegaTron1XD

Please also don't be disruptive with your opinions as well. Dots The Doom

You're putting your proposed policies in the completely wrong place! If you would like to propose a new policy, put it in the SmashWiki namespace, and add {{Proposed policy}} to it. However, I would advise against this; none of your policies seem like they would get much support. Air Conditioner

You'd best listen to all of us then.--BrianDon't try me!

Archives are NOT for editing. Never, ever, ever edit an archive. Air Conditioner

Sorry! Just wanted to apologize for "bothering you about unimportant things". I thought it was only right to try and respond to a message for me. SmashBall104 (talk) 17:53, 20 December 2012 (EST)

That was almost two months ago; you should not take that long to reply. Also, all you did was delete part of my signature timestamp. Air Conditioner

Hi, I looked through your contributions, and in the over three months you been here, you made the equivalent of 4 attempted constructive edits, the last being over a month ago. In comparison, you made 10 edits to your and Awesome's userspace, 8 to Smash Arena and other nonconstructive forums, and many other nonconstructive user talk edits. Read over SW:NOT, and start making more of an effort to edit constructively on the Wiki. Otherwise, you will be probated until a satisfactory effort is shown. Omega Tyrant

You've still only made 4 additional constructive edits since you received this notice, and have made many times more userpage, usertalk page, and Smash Arena edits. Awesome Cardinal 2000 19:49, 12 March 2013 (EDT)

Your Signature needs to identify you, which SB the Muscle-Man Clearly fails to do. You probably should fix that. Fedorakeeby11

Eh. Maybe he could type out "SmashBall" instead of abbreviating it, but I would say it identifies him well enough, the "muscle-man" part even matching the personality he tries to have on IRC. James

My apologies. Got the idea from Dots and how he was constantly changing his signature with random words. I needed to shorten the first part so it would work. SmashBall the Ivysaur (talk) 17:20, 1 March 2013 (EST) 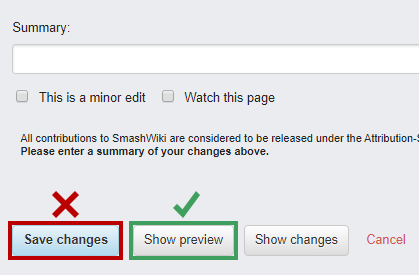 Votes don't go in half-vote section, Unless you have a good reason. Fedorakeeby11

What are you talking about, he didn't intentionally place it in half votes (he screwed up another user's vote, resulting in his being placed in half votes). And even if it did, intentional half votes are allowed. Omega Tyrant

My apologies. I honestly did not know what screwed up there. I did not add my content under the line. SmashBall the :| (talk) 15:54, 12 March 2013 (EDT)
I must have missed something; I read that they weren't allowed on somebody on somebody else's talk page. Plus, how was I supposed to that that's why his vote was there? Fedorakeeby11

One, read the Smash Arena rules, and see that votes are placed in half votes when they're done incorrectly (which is why a vote is in half votes 99% of the time). Two, page history exists, where you can view every edit made to the page. Omega Tyrant

Instead of using [[Character (Game)|Character]], there's a template that shortens it to {{Game|Character}}. They both produce the exact same result, for example: [[Mario (SSBB)|Mario]] becomes Mario, and {{SSBB|Mario}} becomes the exact same thing, Mario. Use the second option to shorten your links and pages in general. Awesome Cardinal 2000 20:06, 25 March 2013 (EDT)

HI, I know you have been notified about this before, but try to use the preview button when making multiple edits to the same page. Other than that, you seem to be adding quotes to pages that do not seem to be necessary. While there's nothing wrong with being bold about ideas to improve pages, doing something like this to multiple pages takes up time for users to undo all your edits if the community deems them unnecessary. In the future, it might be a good idea to raise these kinds of proposals on the talk pages. Mr. Anon

I apologize for not using "Show Preview". I was also looking for constructive edits to avoid getting probated, and adding quotes was the first idea to come to me. SmashBall the Bologna (talk) 13:51, 4 May 2013 (EDT)

If you really need something to edit, go look at the categories I suggested and try not to focus on adding trivia. It shouldn't be this hard to find something to do. Also, April 25th is long past, so you may want to remove that. Awesome Cardinal 2000 16:39, 3 June 2013 (EDT)

The timestamps of your posts[edit]

Are you signing your posts correctly? The timestamp for your recent talkpage posts have been strangely incorrect:

Looking over your other past talkpage posts shows this is a persistent issue - for whatever reason, however you're signing is not stamping your posts correctly. I suggest you check your preferences to ensure your timezone is set as reasonable (e.g. -04:00 instead of -03:52), as well as your computer clock, since I don't really know what the problem could be. And of course, sign with ~~~~, and don't attempt to type in the timestamp manually. Toomai Glittershine

As you may be aware, turns out there's another Smashball on the Wiki. While it is currently being decided which of you get the right to the name, would you be willing to be the one who gets the name change? Omega Tyrant

Well, I read the discussion on it, and I agree that the other one's not as notable. Basically, I'd rather have him change his name. He was never extremely notable here, and (not to sound overly arrogant) compared to me he hasn't done shit. SmashBall104: Preparing for Christmas! 18:40, 2 December 2013 (EST)

Seriously man, stop lying. 48 vs. 75? Pfft! Can't you fucking read!? You may be the original, but you've had big time periods of inactivity, and I have left a bigger mark here, with my 231 edits overall, compared to your 110. And please find a damn dictionary, cuz' "Crapfully" ain't a word.

Or no, since you're too lazy to actually check my editcount, or provide well-written arguments, I'll just put this simply: Either knock this shit off and get the name change, actually try to argue your point, or just go eat a dick! SmashBall104: Preparing for Christmas! 20:16, 3 December 2013 (EST)

When both of your blocks wear off, do not go starting this shit back up. Omega Tyrant

Hi, per the decision here, you are being mandated to change your name. You have 48 hours, to where you must then report to Toomai what you wish your new name to be. Omega Tyrant

The name just can't have some variation of "SmashBall". Omega Tyrant

No problem. Though I don't really understand why using colons in headers is such a bad thing. I've always seen people handwrite and even type like that, so what exactly is the issue here? Is it a problem with wiki-syntax, or something else that I'm unaware of? I'm also not seeing anything regarding colons in the Manual of Style, so... MeatBall104; Only at your Pizza Hut! 22:50, 16 September 2014 (EDT)

...adding the comparison between Donkey Kong's yellow palette swap in SSb4 to Kiddy Kong. Kiddy Kong has brown fur, and while the tie is the same shade as Kiddy's jumpsuit, that's a pretty common color. Besides the fact that they look nothing alike. ...a new Nutta

Alright I'll stop. I guess the lighting in the photo threw me off by making him look yellow. As well as the fact that Kiddy Kong's DKC3 sprites and even some of his artwork make him look yellowish brown to me. I guess I'll get my eyes checked before I edit that page again, sound good? MeatBall104; Build me up, Buttercup! 15:13, 10 October 2014 (EDT)

This was a very strange way to put it.... Anyways, that was overly harsh, and it's often better to tell him to use proper grammar than to write what you just wrote. Qwerty (talk) 17:54, 25 October 2014 (EDT)

Just to let you know, I changed my userbox. That's all.