Her date is a labrador? -Marth looking at Wolf and Daisy on a date in Not Exactly Royalty 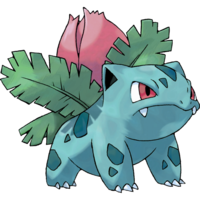 Hello, Smashers. I'm a guy of few words(Most of the time). But I love SSBB. And I like the Pokemon Trainer alot. I play a wide variety of characters. I don't really suck at anybody.-Ivy73

Finally, it's about time I get to this. I'm a quiet person, but I become more sociable around friends (although I limit myself to 3 to 4 friends irl.) I enjoy sports, but not practice. I can be very humorous, or dead serious, or just extremely pissed off. My personality is complex and somewhat unorthodox. I eat very fast and have a giant stomach. Oh yeah, and I'm religious, which is why I censor my swears, but I only swear when necessary, and generally frown upon other people's swearing.

Next order of business. My Smash story started in 2005. My parents bought this TV but it malfunctioned or something, so they sent it back for a refund. They got a gift card. So, me and dad went around looking for something to waste this card on. I went into the video game section, and saw Super Smash Bros. Melee. I saw Mario, Pikachu, Bowser, and Link on the cover. "Hey dad, how about this?" So we got it, got home, and I first tried out Yoshi in Adventure Mode. I pressed A. He kicked...B, R, Z, C...Finally, I figured out it was X. So you could tell I was a n00b at this game and I didn't even know I had a third jump (The instruction book was buried under the worthless GCN manual.) So I unlocked most of the characters, some of which I had no idea who they were. "Who's this guy? A 2-D black guy?" Anyway, after about 4 months I got the hang of it. It turned into my favorite game. An accident of which I will not speak of happened and mom banned the game in 2007. Those were dark days. After 2 years Smashless, I stumbled upon the SSBB website. "...:)" It was finally coming. Another Smash game and it had the Pokemon Trainer. "THE POKEMON TRAINER", I said to myself. "This is gonna be epic." It definitely was epic. I easily unlocked all characters, but I was disappointed with the Adventure Mode. Why not the old one? Fortunately, wifi saved teh day. Then I came here to Smashwiki a year later. Ah, it always feels satisfying to finish a giant WoT.

Vincent Tran-Good friend, brawled him, and he XD a lot

Before you stomp that Goomba...

Other places on da web

World of Tanks (known on here as TexanSniper)