An Ike main who will be willing to go into tournaments in the future. I work for WWR and PGR for tier numbers in each tournament and create tournament wiki pages. I also know much about competitive play too. If you want to find or talk to me in discord, I'm mostly active in MkLeo's Discord.

How I Do Ranked Tournaments

Tier of tournaments are based on the player rankings, for example with MkLeo being the best player in the world, points are taken down if he attends a tournament basically scaling on how many ranking players are played in a tournament with Weak being C-Tier, and Strong being S-Tier (order C-Tier, B-Tier, A-Tier, S-Tier). I have also done orders and math for tiers in WWR so expect me to see some of the tiers dated from the tournaments in WWR during these times. Any upcoming tournaments I'll make from Smash Ultimate Tournaments will be recorded mostly on WWR on online due to COVID. After COVID ends I'll do PGR tournaments, mostly for Ultimate but Melee is also acceptable (Other games aren't seen in WWR due to Smash 4 not being very popular and games like Smash 64 and Brawl having no reliable internet (if you include Smash 64 remix and Brawl albeit having an internet mode, is relatively very poor most of the time)).

How I Do Tournaments

Counting mostly on the top (64, 48, 32, 24. 16, 8; depending on the players). I also usually see the past scores/matches too so I can see which characters they used to win. Knowing the base of the characters are also known from how they win, if they win a character after beating another opponent, the record is being used. If they lost with that character while winning, it doesn't count. If they lose while winning a game with them, it doesn't count. Taking notes on their placement as well, contrasting on how similar their placement and where they lost at compares to how Brackets aren't specific enough saying that 63 is 64 in placement.

Players Who I can Win/Lose to

I actually played with them and here are my results. If you want to play with me, you can! Talk to me in discord to play some games with me.

Decided to play with him, easy wins.

Played with him in subgames, got absolutely destroyed by his Greninja.

I got blocked once, due to not understanding SW:TALK, as I kept on removing the talk page. I got pissed just from a message as I created The Quarantine Series Opening Invitational. Sorry Cookies

You can put it in one of your userboxes. You can have it.

If you want to see PGRU ranked player tier lists, without watching the videos, click this link.

Shining Stars That I Got

I saved this so people just see this. 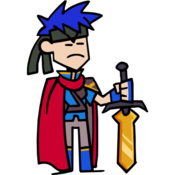 This was used for April Fools for Ike.