Since the serious buffs and Abadango at pound, he has been playing Mewtwo quite a bit. If he uses it in bracket, only time will tell. He is sticking with Cloud but I've seen him use it for mvg smash conference so I dunno. He has played so many different chars before so holding off on adding him to the list of players here seems like a good idea. RobSir

From a test I did a while back, I was able to compile a list of pummels in order of overall damage racking potential. From this list I found that Mewtwo's pummel was noticeably below average, and outside the standard deviation for a pummel's damage racking capabilities. I later discovered that the grab release timer does not pause to compensate for hitlag dealt by pummels, which I believe explains this anomaly. Effectively, the hitlag of a pummel slows down the overall speed of that pummel, and both Pikachu and Mewtwo's pummels use the electric effect. To compensate for this, Pikachu's pummel has a hitlag multiplier of 0.5, however Mewtwo's pummel does not. This means its pummel gets the full 1.5x hitlag bonus of the electric effect, and due to it being a pummel with a moderately high hit rate, this stacks up and results in his pummel being noticeably slower than it should be. This would explain why his pummel's damage output is poor despite seemingly average frame data for a pummel of that strength. Alex Parpotta the flying lobster! 09:20, 18 November 2017 (EST) 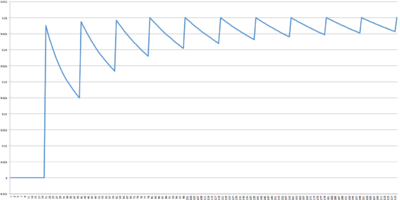 After doing more than 200 uses of Mewtwo's Confusion, I determined that the move was doing 9.05 damage, as starting from usage 80, the damage average jumped up to 9.05 every 20 usages. However there was a slight anomaly for the first 3 damage peaks, as they did not jump up to 9.05, but rather they converged towards it, hitting it exactly by the fourth peak. This doesn't seem to make sense though, as every 20th multiple of 9.05 is a whole number, and the game always rounds damage on the meter downwards, so there's no reason I can think of for why the first 3 peaks did not hit 9.05. Does anyone think they can explain this? Alex the Jigglypuff trainer 08:01, 11 June 2018 (EDT)

Short answer: Float math is inaccurate.
Slightly longer answer: Confusion deals (1.15 * 7) + 1 damage. However, the closest a computer can get to 1.15 in floating point math is 1.14999997615814208984375. Add a bunch of those up (taking into account how conputers probably can't get the exact interim totals either) and you'll get an answer slightly less than what you expect, until eventually the total's inaccuracy falls towards the positive side instead. Toomai Glittershine