It's possible to dodge a Critical Hit with Marth's or Ike's counter. Counter prevents you from damage and Knockback, but you cannot damage the Marth who uses Critical Hit. Shall I add this to the article? Mariofan13 (talk) 08:27, 17 January 2015 (EST)

Should Roy's final smash get its own page since it functions significantly different than Marthcina's? ---Preceding unsigned comment added by you. Or maybe Nutta. 15:20, 21 June 2015 (EDT)

Nah, many other Final Smashes with other names but different attributes are combined on a singular page; see Light Arrow, Triforce Slash, and Landmaster for examples. Archrelico (talk) 07:38, 22 June 2015 (EDT)

Light Arrow only has one difference (angle), Triforce Slash is just range, and... i honestly dk about Landmaster. This one is basically an entirely new move, so if Wolf's Blaster gets its own page, I think this should too. ---Preceding unsigned comment added by you. Or maybe Nutta. 18:28, 27 June 2015 (EDT)

The Landmasters vary in strength, Wolf's is faster and stronger, Falco's last longer and flies higher, and Fox's is in the middle. ZeldaStarfoxfan2164 (talk) is made in America 19:53, 27 June 2015 (EDT)

I agree with the unsigned comment. The different between Roy's version of Critical Hit and Marth's/Lucina's are major enough that I believe it warrants an edit. Perhaps even Landmaster deserves a split between the three Star Fox characters.

Can we try and use these two images in the infobox instead (YES it is possible to use two at once) and NO I'm not saying the current image is bad, just "something feels a bit lacking about them" I don't know why? I clearly understand the trouble of capture cards and pausing the game at the right time to get a perfect shot however, so if that is the issue, no hard feelings, I understand.) 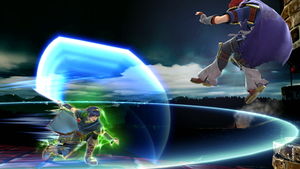 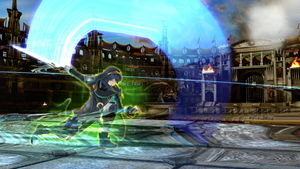 If anyone wants to use these images for the infobox, I'll be sure to do Roy next, and if not, its alright. (Please ask me permission of use of the images in other pages however!)

Welp im bringing this topic back because it is a topic we need to talk about again. Should we split this page or keep it the same. Reminder if we keep it the same that means we are setting a precident and making other final smashes with the same name put in the same page always. For instance right now the ultimate final smash of samus and zss are named the same but act 100% differently. Should these keep their current status as different pages, or be combined. If they are combined then we don't change this page, but if they aren't combined then we must split this page. This probably sounds confusing, so to restate, We must either split this page, or merge ssbu zss and samus' final smashes we can't have a one or the other because they directly contradict each other. Xtra3678 (talk) 11:26, 11 March 2019 (EDT)