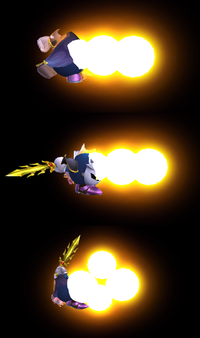 Meta Knight slashes twice in front of himself, then once upwards. The last hit deals low vertical knockback. First slash deals 4% damage, second deals 3%, and the third deals 5%, for a total of 12% if all hits connect. It is possible to control how many times it hits; only pressing the attack button once will cause Meta Knight to perform only the first hit, and pressing it twice more will cause him to slash the second and third times. This move has incredible speed and range, and has great combo ability, with the first two hits being able to cancel into another move, the third hit being able to lead into other moves, and the move being pretty useful for racking damage is used repeatedly. It's also safe on shield if used correctly, though performing all three hits on a shield is rather punishable. Additionally, it is possible to SDI out of the move (being a multi-hit move), which can lead to a punish, and at higher percentages, it's difficult (if not impossible) to connect all three hits since the first hit has enough knockback scaling to prevent the other hits from connecting. Overall, the move is a very useful spacing tool on the ground, and a decent combo starter.

The move's already quick speed can be sped up even further using buffering. Buffering Meta Knight's forward tilt works a bit differently than most moves that can be buffered. This can be performed by, right before Meta Knight is about to perform another move (e.g. just before his spot dodge animation finishes), sliding the control stick slightly in the direction used for the forward tilt, tapping the A button once, and letting go of the control stick, letting it snap back to its neutral position before the animation it's being done out of finishes. If performed correctly and quick enough, the first two hits of the forward tilt should be unleashed as fast as possible. The third hit can be performed in basically the same way as the first two hits, but one should add another action to the equation - when the first two hits are coming out, if the C-stick is quickly pressed forward, the third hit should come out as smoothly as the others if performed correctly. This technique is great for followups, mindgames, and can rack up a large amount of damage if used after a move such as a down throw (this particular combo can deal 15-16%). [1]

For technical data of each individual hit, see: