This article is about the hitbox visualization in Super Smash Bros. 4. For the move itself, see Rollout. 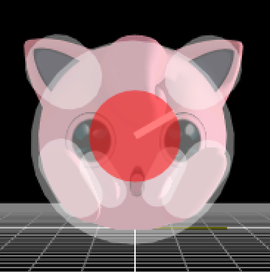 Jigglypuff charges up by spinning on the spot, with the graphical effects around it gradually increasing in intensity. When released, it rolls along the ground at a high speed, and can be reversed while on the ground. When landed it deals 7-14% damage depending on the speed, and when at full strength possesses moderate KOing potential.

In competitive play, the move is rarely used due to it possessing several serious flaws. Firstly, the move's long charging time and large audio and visual cue make the move incredibly predictable, and therefore makes it hard to land. The opponent can somewhat easily jump over the move, or even more easily shield the move to avoid it, and due to the move's long duration and ending lag, it can often be punished. The move also has a very small hitbox inside Jigglypuff, even smaller than Melee's rest hitbox, which as well as making the move awkward to land, also effectively gives the move very poor priority, as the opponent can use a lingering attack to hit Jigglypuff's hurtbox, but not the hitbox of the attack. The move can be used to recover, and has the ability to snap to the ledge, but the opponent can simply intercept the attack, even from onstage via shielding, and this will cause Jigglypuff to fall to its death.

However, the move does have some usefulness, although generally it is very situational. Firstly, hitting a shield while on the ground will not stop the move, so Jigglypuff can then reverse the move, pressuring the opponent into holding their shield, to hit it again. In some circumstances, it may even be possible to hit the shield a third time, which if the move is fully charged will likely break the shield. Furthermore the move can be used to punish opponents attempting to land onstage from a distance, by timing the move so that it reaches the opponent just as they are about to enter landing lag. Finally, the move can be used to bait the opponent to attempt to counter it, and by reversing the direction of the move (which temporarily removes its hitbox) just as Jigglypuff is about to hit the opponent, it can safely roll behind them, then turn and hit them during the ending lag of the counter.

Overall, however, the move's flaws are considered to greatly outweigh any positives it may have, resulting in the move very rarely being used in competitive play.