The European Smash 64 Power Rankings are power rankings that rank the best players in Europe. There are currently three rankings

The First European Super Smash Bros. Backroom was created by Anotherish, Bert, Kaki, and Olikus for the purpose of releasing an offline power ranking for Europe. They release their rankings on their blog.

Ranking procedure: Based on the H2H. Players had to have two tournaments, if they only had one tournament but also top 10 worthy results they were moved to the "Honorable Mentions" section. Positions were decided by consensus of the panelists. 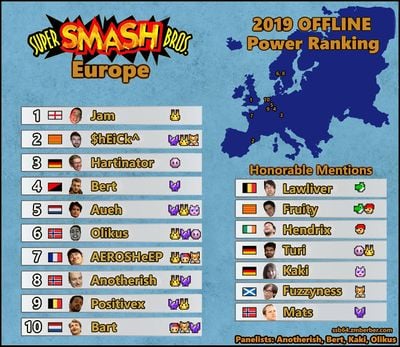 Kaki releases rankings for online tournament play on the Smash 64 Europe Account, formerly releasing them on her own twitter. Ranking procedure: TrueSkill based on H2H from the results of a time period of 1 year, so for example the rankings for April 2020 are based on results from April 30th 2019 - April 30th 2020, currently monthly released.

Spreadsheet with the H2H

Spreadsheet with the H2H

Ranking procedure: TrueSkill based on H2H since the start of the European online weekly.