If you want to brawl, I'm available typically at 3:30/4:00pm to 6:00pm Pacific Time. I live in Lawndale, California, USA, if you must know. I will provide my brawl code the first time someone asks. Thank You!

Need help? The Community Portal has an outline of the site, and pages to help you learn how to edit.

Ok, thank you. So don't edit jpg files right? but images under png with black background are ok to edit. Is this correct PikminBrawler (talk) 15:33, 27 July 2011 (EDT)

Don't edit any ingame screenshot that's to be used in the mainspace. As for those earlier images that were edited, I'm not sure of where they exactly come from (as there is no all black non hacked stage in Brawl, and as such, I can't definitely say they fall under being ingame screenshots), and I do think an all white background is objectively better than an all black background in the context of those images. Omega Tyrant

Well, Im not sure eithier, you would have to ask Pikamander2 (talk•contribs•logs), those images came from him. Anyway, I think that the transparency looks better than the black background, wouldn't you agree?

Pikamander2 is inactive, so asking him is pretty worthless. Forbidden7

The background is, but not the stage you stand on itself. Omega Tyrant

However, screenshots of aerial characters could be taken in such a way that they are against a fully black background. Miles (talk)

Yes, ariels would be possible, but take this image, for example. This could of only be taken on the ground, by looking at Nana's and Popo's feet, that seem to be holding a footing on a floor. If it was taken on Mario Bros. or 75mm, at least a small portion of floor would be showing. and look at the edges of the Ice Climbers. It seems that the black doesn't belong to the original shot, more like they were pasted on to the black background 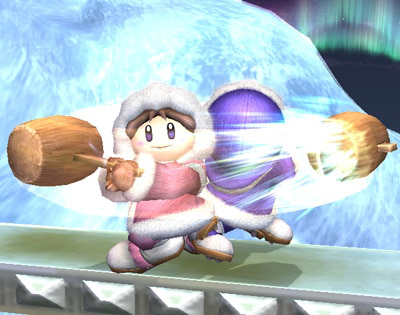 I know you're trying not to but[edit]

Please try to keep everything in one edit, as you clog up recent changes by not doing so. Forbidden7

I know, but I found my links led to nothing, then a spelling mistake, and other "How did I miss that?" mistakes. I'm truley deeply sorry, I'll try to remember to check everything before saving changesPikminBrawler (talk) 21:22, 27 July 2011 (EDT)

I'm from CA too, btw Forbidden7

I used to be in California as well. ..... Battlecruiser operational.

You can talk this with him at the IRC. ..... Battlecruiser operational.

Register now, Brawl at a later date. And ...., IRC isn't neccesary if the talk page conversation isn't pointlessly filling up the talk and recent changes. Forbidden7

Only time I have before I go on a camp trip. ..... Battlecruiser operational.

To welcome new users, you must substitute the welcome template instead of transcluding it. In other words, type {{subst:welcome}} DoctorPain99 {ROLLBACKER} 20:18, 3 August 2011 (EDT)

Sorry about brawling but I'm going to brawl with Blind. Maybe on Friday. ..... The Google

Wait, blindcolors? we can all brawl together! I has his friend code too! I'll create a room at 4 if that's ok! PikminBrawler

Yeah, you two can play/wait till I go online, I just had a blackout. Luckily, I can use my 3DS to check on messages! PikminBrawler

and who were those other people as well. ..... The Google

Well, the first one who entered was my brother, whom is pretty darn good if he hadn't bruised his hands. And the other guy was some kid I babysit, I really don't thinkmhe was a good player. By the way, was it 4 when you entered? Me and Blind had to brawl solo at 4! No complaints though. Youre very skilled with ariels, I hardly even moved before you knocked me off! PikminBrawler

So did I even face you at all? Nice Ice Climber skill too. ..... The Google

I think you misunderstood me. I was the one who joined the game. Then my brother came in as Fox. Then the kid as mario. Hey, want to go at it again? Ask Blind if he wants to join. PikminBrawler

Are you gonna join or not? We are waiting! PikminBrawler

Can't, how 'bout tommorow? Please don't message me till tommorow, I going to give myself a official warningnif I see recent changes again. It's stuffed with our chat!

Like blind said, we still need to edit this wiki. ..... The Google

Sorry bout that. I'll change it later. Wolf is supposed to be where the first shiek/zelda icon is, if you need to know.

Seriously dude, brawling is fine but you're asking every day. Just saying. BlindcoloursWho ARE YOU running from!?!? 17:54, 5 August 2011 (EDT)

ok. to avoid future questions, yes everyday for the next month. So, im here at the same time on every day. PikminBrawler

thank you. I think I'll move ZSS and Sonic up a notch. Do me a favour, and read the last few sentences of my userpage. We'll brawl later. On Saturday. O.K ? I going to play Echoes.

or what I said at the end of the good game section. ..... The Google

yes, yes I did. Saturday at the same time. No hard feelings on what I told you off about? PikminBrawler

well, I can't on the 3DS. I'll try to fire up my computer. If I'm not there in 10 30 minutes, my computer probably isn't working. I'll check, but I.m not promising anything.

Ill be waiting with the name Raynor. ..... The Google

Or what about that sat. thing about brawling, you did say that right? ..... The Google

Sure, *sigh* I know someone will yell in All Caps and say how bothersome you are. (Im looking at you, Blind)

A couple of talk page tips[edit]

Put your signature at the end of your comment, rather than below. And use colons at the beginning of your comment to indent it accordingly when you're directly replying to someone else's comment. Omega Tyrant

Ok, got it. I was confused when I tried to indent, but it became a plain text box.PikminBrawler

Yeah, if you indent your comment with spaces, you get a text box. Omega Tyrant

Dude, what template did you use for the custiom tier list? 25T16

It's not really a template, just go to my page and copy the code. I'd do it myself, but too much memory for my 3DS. Just click edit under My Tier/Fav List and copy the whole section, then add/edit/delete to suit your needs.PikminBrawler

When making structural changes to articles[edit]

Be sure to apply it to the whole article, rather than just a single section. Omega Tyrant

Sorry. I can't most of the time, since the 3DS can only load so much text. Can I edit one section, then the other, to avoid editing it as a whole, and the risk of deleting part of the page? I hope you understand. Pikmin Brawler

Then finish the other section immediately, and do not leave the Wiki with one half of the page in one style while the other half is in another. Omega Tyrant

But I hope that'll change soon.

Thank you, ReiDemon! I hope to know you better too! Pikmin Brawler