The following discussion is an archived debate of the nomination of a new site logo. Please do not modify it. No further edits should be made to this page.

Firstly, I wasn't sure which namespace to put this in, but this seemed like the right one. Anyway...

You may have already seen this on one of my subpages - I decided to make it an official proposal, so I moved it out of the user namespace.

This wiki's current logo is just over two years old, and while interesting-looking, is somewhat bland. (This may be just because we've been staring at it for two years, though.) The new logo is colourful (but not overly so), Wikipedia-styled, and fresh. So, I ask: who would like to see something with a bit more pop? Change isn't always good, but I believe in this case it is. Toomai Glittershine

Toomai, if you could find a Custom Text to go on the bottom of the proposed logo, I might neutrally lean towards supporting it. Preferrably the text seen in the Super Smash Bros. series games and their titles. Also, if you could just fit the Master hand in there somewhere... like, make him grab the Wikiglobe or something. I imagine that you might need to do some more tweaking, but with your picture-editing skills, it shouldn't be too much of a hassle. :) BNK [E|T|C] 23:35, March 18, 2010 (UTC)

Do you mean simply using a font from, say, a game's box art? If so, that would be either difficult (SSB64's title and the "Brawl" on SSBB's are incomplete fonts) or boring (the "Super Smash Bros." on SSBM's and SSBB's cover is simply a prettied-up Times New Roman, and using anything other than plain TNR would make the text stand out too much). I could do custom lettering, but based on past font experience it may look displeasing. Now, Aharoni wasn't the only font I had on the list when I put this up - others included Comic Sans MS (generic but not bad otherwise), Copperplate Gothic Bold (nice and statement-like), Jokerman (a personal favourite, but probably too chaotic), and Snap ITC (think and goofy but probably too weird). Currently, I'm looking for a font that emulates the Brawl menus and damage %s - I'd appreciate help with such if you can give it. Toomai Glittershine

It would still be original. It's the best idea for the image, but if you have trouble finding fonts, download one from here. There are plenty to choose from, and since it is an image, you won't need to worry about other people needing to download the font you used. BNK [E|T|C] 04:47, March 19, 2010 (UTC)

I've put up a version using American Garamond - which looks like it could be the Wikipedia font. Also, I've looked into seeing what I could do with Master Hand, but it's looking like it ain't gonna happen. Shrinking the globe any more will make parts even more unrecognizable, and putting him inside peeking out looked more like "what the heck it's got ears" than "oh, that's Master Hand" - not to mention that Blender decided to crash a few minutes afterward. Toomai Glittershine

I'm liking this better. Is there any chance you could use small uppercase letters in place of lowercase, again a la Wikipedia? Miles (talk) 21:14, March 21, 2010 (UTC)

Will look into it; small caps are finnicky but I can agree it might look a lot better. Toomai Glittershine 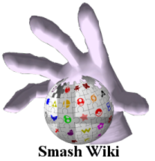 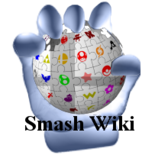 There is a debate about the new logo. While some like the new logo because it is colorful and it is styled after the wikipedia logo, some would rather keep the original logo because the new one doesn't have Master Hand, in which they consider that an important detail. Here's an alternate version of my logo. This one is more similar to the original one. --Mr Alex (T) 23:24, March 23, 2010 (UTC)

If you want Master Hand in the logo so badly, then I'll provide an interesting-looking Smash Ball or something. In my opinion, having both Master Hand and the Wikipedia reference in the same logo is overkill and does not look very good (there's no way to put Master hand in there without him dominating the image space, making the globe look constricted). Toomai Glittershine

Hear me out: It's obvious that this won't go anywhere and we'll never reach a decision with these unbalanced choices. I support your current logo, Toomai, but the font needs to be black. That's it, and you'll have my full support. I figured that the Master Hand makes the SW Globe look small, and if we enlarge it, Master Hand will end up not being able to fit at the top right. If we shrink the Master Hand, that still wouldn't look right, so there. Also, you're still welcome to surprise us with the Smash Ball thing you were talking about. BNK [E|T|C] 03:25, March 24, 2010 (UTC)

I remember a time when the logo on this wiki was changed every few weeks without any warning. Now it's like a frickin' debacle over a damn logo. Who cares? Kperfekt BURN!!! Revert That! 06:17, March 24, 2010 (UTC)

Alright then, I've put up a new font idea, based on the font of the current logo. This is the last version of this logo I'm going to consider. Toomai Glittershine

Retro font doesn't really work at that size. The outline is clearly blurring the white in "Wiki" and the font appears to be a bit-map font, which really doesn't work at that size as well as a vector based font would. I still probably prefer the current, but the American Garmond font works for me as well. Clarinet Hawk (talk · contributions) 16:28, April 2, 2010 (UTC)

I care more that there's small caps and less that it be black instead of purple. Though IMO either black or purple would work. Miles (talk) 22:46, April 2, 2010 (UTC)

I just changed it into small caps and black text, and I have to say it looks rather good. That said, it looks even more like a Wikipedia rip-off now. (And by the way, it's not purple, it's light blue - #7f7fff.) Toomai Glittershine

imo, black all-caps makes it stand out too much from the much more subtly colored Smash Ball part of the logo. The light blue Aharoni doesn't stand out from the rest, and in fact suits it rather well aesthetically as well as being reminiscent of the Wii font. And as Toomai said, the black all-caps American Garamond is so similar to the Wikipedia logo that it's starting to look more like a rip-off than a clever play on it. PenguinofDeath 23:33, April 2, 2010 (UTC)

I like the black American Garamond much better than the other two.highway pumpy sfs 19:56, April 6, 2010 (UTC)