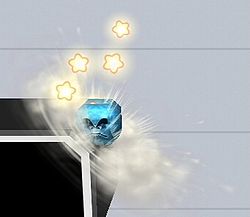 Kirby using the glitch on PictoChat.

The earthquake glitch refers to a glitch that can only be performed by Kirby in Super Smash Bros. Brawl by using his down special move, Stone. The glitch causes Kirby to repeatedly hit the ground without moving, letting him constantly damage people as if he's falling. The glitch is performed on sloped surfaces, but not all such slopes can be used for the glitch. In Stage Builder stages, the glitch can only be activated on the edge of a right-facing slope. It is possible to use Stone on the slope, slide to the edge, and then activate the glitch. The glitch does not eliminate the time limit for using Stone normally, so it cannot be continued infinitely. However, the player can simply initiate it again.

This glitch is commonly done at PictoChat, where it is often known as "Pictopounding". The Kirby player must go to the right side of the main platform where there is a slope, then use the down special move. Kirby will transform and appear to repeatedly "land" on the edge of the platform, making constant shockwaves and causing the screen to shake. He will remain like this for the duration of the move. This does not work on the left side of the stage; instead, he will simply slide off the edge and fall normally. Any players caught in the glitch will respond as if they had been hit by Stone repeatedly at an incredibly fast rate. It is difficult to combo such an attack, as Stone's push-away ability in Brawl and its regular high knockback tend to send opponents flying.

While the glitch was first discovered and popularized in relation to PictoChat, it can be performed in numerous other locations: