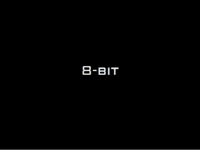 8-Bit is a Melee combo video featuring gameplay of Mr. Game & Watch by Nakamaru. It has gained popularity due to its unusual usage of synchronization between audio and video - the video opens with clips of G&W's forward aerial in time with the song's drum beat, and almost every time the vocals say "Hey!" a clip of the Judgment attack connecting with a 9 is shown. The video shows heavy usage of Fire and G&W's down aerial to disrupt recovery, as well as usage of his forward smash and down tilt to edgeguard.