Can someone remove the speculation? I've heard at least 5 different names for this attack, not limited to Me First, Reversal, or Detect. Who decided it's counter? And counter doesn't even mention Lucario! Gargomon251 04:39, February 26, 2008 (EST)

just keep changing it back to "Lucario's Down-B" until we get a legit name. if someone keeps speculating, report them to an admin. they might get a temporary ban if they don't learn to play by the rules. FyreNWater - (Talk • Contributions ) 23:52, February 26, 2008 (EST)

I think the statement that Lucario HAS to be hit from the front should be taken out, as I have successfully had double team work when hit from behind numerous times. I even just went into training mode, had Ike use a Neutral B on Lucario from behind, and successfully had Lucario counter Ike. 71.122.202.181 00:36, 17 March 2008 (UTC) Joete

Does anyone even use that anymore? It's fairly simple to find an attack or ability that negates all accuracy/evade, and in the time it takes to set up, the Pokemon could easily be knocked out. - Gargomon251 02:04, 13 April 2008 (UTC)

Very few people would actually try to use moves like that, but in every tournament I have heard of they use the Evasion Clause anyway. (It is also an option in Shoddy Battle, an accurate online pokemon battle simulator.) Klepto 03:24, 13 April 2008 (UTC)

With all due respect, that sounds like a scrub technique, like no items. It's fairly easy to counter and using Haze or switching either Pokemon, as applicable, completely nullifies it. This isn't like making a team of ubers or something. - Gargomon251 07:20, 13 April 2008 (UTC)

While I don't completely agree with the evasion clause, if you do a google search of all the differemt clauses (like the freeze/sleep clause, self-destruct clause, item clause, species clause, etc) the evasion clause is almost always listed as well. Klepto 20:36, 13 April 2008 (UTC)

Says Lucario something when this move hits in the english version? In my german version Lucario says "Es ist noch nicht vorbei"(It's not over yet) when it hits someone.

There is just an image of the first part of the move, doesn't show the actual attack part. I have noticed this same inconsistency on the Counter page, thought that is understandable seeing as that would mean like five or six more images to upload, but for this one would a picture of the actual attack be appreciate? MtnDewholic (aka "Dewie") 16:36, 3 July 2011 (EDT)

Possible image for use on this page: 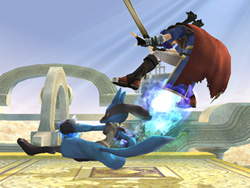 I say go ahead and add it. Omega Tyrant

Alright, thank you. I would do it myself, but I seem to have forgotten how to perform that particular function. MtnDewholic (aka "Dewie") 14:36, 4 July 2011 (EDT)

The first trivia point states that Lucario can control the direction of his counterattack, but the video provided shows it working in Brawl. ...Any word on it being able to happen in Smash 4? (I'll call Lucario a "he" on the talk pages because Lucario has a 7:1 gender ratio, but I will respect the SmashWiki's rules and refer to Lucario as an "it" on the actual pages.)