The term "shield drop" should not be confused with "dropping one's shield", which refers to when one lets go of the shield button and stops shielding.

The technique is simple to execute in Smash 64, as there is no sidestepping in that game to interfere with the function of pressing the stick downward while shielding. An interesting property the technique has is that it grants one frame of intangibility. This does not occur with a normal platform drop, and the intangibility would be removed in later games. 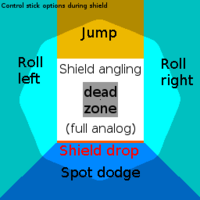 Shield options with the control stick in Melee.

As the sidestep is introduced in Melee, pressing the control stick too far and too fast results in a sidestep. Since this makes it hard to platform drop while shielding, the player must either be very precise with their inputs or press the stick down during a different action than shielding (such as a dash or shield stun) with close enough timing that the sidestep window is closed but the drop window is still open.

This is exceptionally useful in Melee for a few reasons: First, a general lack of buffering on defense, meaning every option requires immense precision or commitment to get guaranteed punishes. Because shield dropping is bufferable, the player can consistently retaliate extremely fast (Outside of shield dropping, performing too early will eat the inputs, as opposed to Ultimate, where it will wait and do them on the first possible frame). Second, it's very useful to mix up movement considering the multitude of strong juggling options many Melee characters have. And finally, the relative speed of shield dropping compared to other ways of leaving the platform is non-committal generally (Shield-dropping is much more precise and fast, as opposed to wavedashing and full-hopping off a platform). A common strategy is to go for many full hop reads on opponents who are cornered, and if they retaliate too slowly, the player can get a very fast shield drop aerial and convert into big damage. It's almost similar to being able to crouch cancel after an aerial, but on a platform.

This "window" is made considerably easier to hit using the Axe/Sung method, wherein the player fully angles shield left or right (after doing an aerial/waveland onto a platform, or by slowly tilting it manually), then rotates the stick downward to the next notch (From full left to down-left, or full right to down-right). Because of the alignment of the diagonal notch being generally close to this range of values, this can allow the player to quickly buffer shield drops with one control stick input out of shield stun without accidentally spot dodging.

Because the margin of error for getting a successful shield drop is limited to only three Y-axis values, shield dropping is frequently very controller dependent. Many modern official GameCube controllers are able to do it to the left out of the box but not the right. While this would normally cause a huge issue of fairness, considering the importance of this tech, many Melee players modify their controllers temporarily or permanently to have a control stick gate that aligns with these values on both sides. These are called "shield drop notches" and are generally pretty simple to do with modern tools. If not, there are many controller modders around who are able to do this, and it can be relatively cheap. The simpler and easier alternative - the temporary solution - is to use small cut pieces of tape on the control stick gate, to "pad" the corner enough that the stick hits the necessary values.

Shai dropping is a type of shield drop used to fall through a platform out of a dash. One way to perform it is to hold the control stick down at a 45-degree angle, press shield, then press down. If done correctly, the character will cancel their dash with a shield drop. More information can be found in this Smashboards thread.

Falco performing a shield platform drop on the floating platform of Smashville.

In Brawl, while the conflict between sidestepping and dropping persists, there is now a small window where a drop can be made without triggering a sidestep: the player must move the control stick down to 68.75% of its maximum downwards angle in 6 frames without moving it past 70% of said angle in 4 frames.

In SSB4, the technique remains the same as in Brawl. However, it is possible to perform a down smash or grounded down special immediately out of shield on a platform if the control stick is moved down just slightly less than that of the regular shield drop angle. Additionally, and perhaps most interestingly, Yoshi loses the ability to shield drop and perform the previously mentioned technique due to his unique shield.

The primary use of shield dropping is to punish the use of moves on a shielding player on a platform, as it allows players to quickly do an aerial out of shield to punish ending lag. Shield platform dropping opens a larger possibility of comboing, tech-chasing, edgeguarding, mindgaming, and out-of-shield options. The player can run and pass under the platform, which cannot be done without shielding in Brawl. This technique also gives Yoshi a quick way to act out of his unique shield, as he cannot jump out of shield in Melee and Brawl.